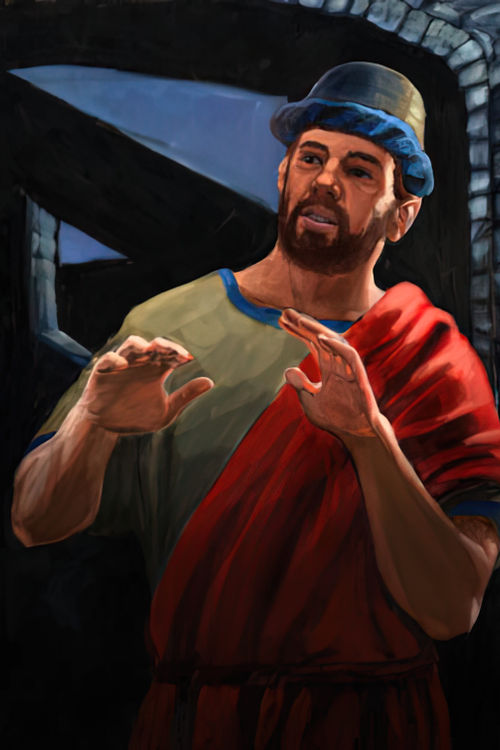 Zoram was employed by Laban, a descendant of Joseph who was keeper of the records in Jerusalem. When Nephi obeyed the Spirit of the Lord and killed Laban in order to obtain the brass plates containing the history of the covenant people and the commandments of the Lord, Zoram was recruited as a member of Lehi’s exodus. At first Zoram, who had retrieved the brass plates by command of the person he thought to be Laban, was terrified to discover that his disguised companion was not his master after all, but an interloper who held him captive against his will. However, Nephi promised by an oath to spare his life and grant him his freedom if he would join the group in the wilderness. Zoram gave his word that he would comply, and the party then returned to the tent of Lehi. When the aging Lehi gave blessings to his sons after reaching the Promised Land, he also included Zoram.

And now, Zoram, I speak unto you: Behold, thou art the servant of Laban; nevertheless, thou hast been brought out of the land of Jerusalem, and I know that thou art a true friend unto my son, Nephi, forever.

Wherefore, if ye shall keep the commandments of the Lord, the Lord hath consecrated this land for the security of thy seed with the seed of my son.

Thereafter, Zoram maintained his allegiance to Nephi’s group. When Nephi separated himself from his wicked older brothers Laman and Lemuel following the death of Lehi, Zoram accompanied him, along with Nephi’s siblings Jacob, Joseph, and his sisters. “And all those who would go with me were those who believed in the warnings and the revelations of God; wherefore, they did hearken unto my words”.

From time to time over the ensuing generations, some from the lineage of Zoram chose to detach themselves from the spiritual mainstream and seek their fortunes in worldly pursuits or among the Lamanites. One of these was Ammoron, the Nephite dissenter who became head of the Lamanite forces when his brother Amalickiah was killed in battle. In a letter to Captain Moroni around 63 BC, he declared, “I am Ammoron, and a descendant of Zoram, whom your fathers pressed and brought out of Jerusalem”. Ammoron was slain by Teancum, the Nephite general around 60 BC , thus fulfilling a portion of Lehi’s prophetic blessing to Zoram and his posterity that “nothing, save it shall be iniquity among them, shall harm or disturb their prosperity upon the face of this land forever”.

The name Zoram also appeared in a dissenting faction among the Nephites. They called themselves Zoramites, after their leader Zoram. It was to this group that Alma and his companions directed their missionary efforts about 74 BC. Whether these people were descendants of Zoram of Jerusalem is not made clear in the text.

In 81 BC the Lamanites attacked and destroyed the city of Ammonihah, taking some Nephites captive into the wilderness. The chief captain over the Nephite armies was a man named Zoram, who inquired of Alma the high priest where he should take his forces to recover the captives. Alma received directions from the Lord and the recovery was successful. Whether this Zoram was also a descendant of the Zoram of Jerusalem is not confirmed in the text.