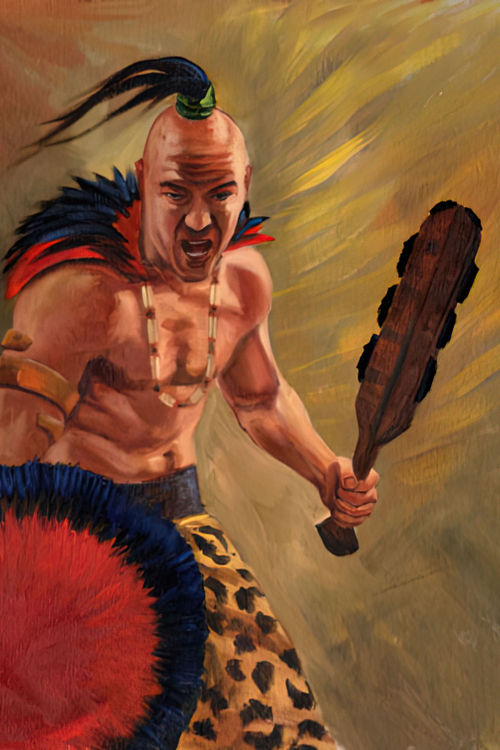 Zerahemnah was a Lamanite general against whom Moroni, as supreme commander of the Nephites, won a decisive victory around 74 BC. Because of Moroni’s superior armaments and positioning strategy, he had surrounded Zerahemnah and offered him an ultimatum: surrender his weapons and enter into a covenant to desist from warfare, or be killed. Zerahemnah responded, “Behold, here are our weapons of war; we will deliver them up unto you, but we will not suffer ourselves to take an oath unto you, which we know that we shall break, and also our children; but take our weapons of war, and suffer that we may depart into the wilderness; otherwise we will retain our swords, and we will perish or conquer”. Moroni was firm, demanding both the weapons and the oath. As Zerahemnah advanced upon Moroni with sword raised, one of Moroni’s men rushed forward, knocked the sword to the ground so hard that it broke, and scalped the Lamanite general. The protector then raised the scalp on the point of his sword and declared, “Even as this scalp has fallen to the earth, which is the scalp of your chief, so shall ye fall to the earth except ye will deliver up your weapons of war and depart with a covenant of peace”. Many of the Lamanites then surrendered their weapons and made a covenant of peace, allowing them to retreat into the wilderness. Those who did not followed their raging leader forward to do battle. Moroni’s forces responded and began to overpower their poorly equipped enemy, whereupon Zerahemnah retracted his earlier claim and swore an oath of peace. Moroni then disarmed the enemy and sent them back into the wilderness.