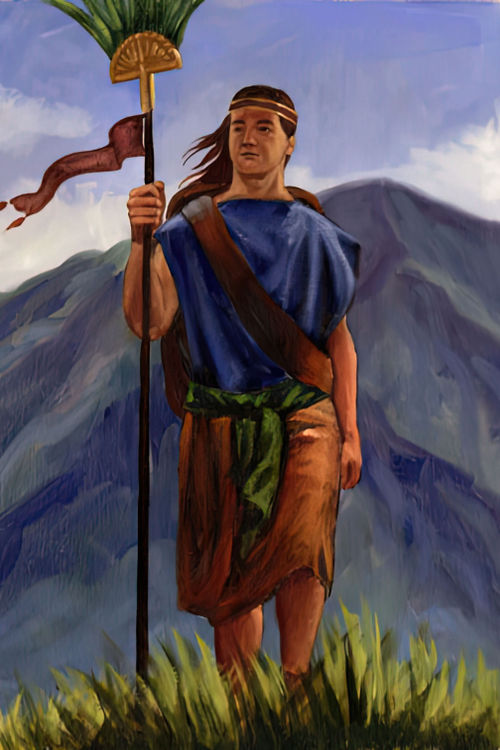 Zeniff, a Nephite from Zarahemla, was a member of an expeditionary army around 200 BC intent on returning southward to reclaim the land of Nephi from whence their ancestors—led by Mosiah I—had fled according to the command of God. Zeniff was a principled individual, “having been taught in all the language of the Nephites, and having had a knowledge of the land of Nephi, or of the land of our fathers’ first inheritance”. He refused to participate in the destruction of the Lamanites according to the orders of his army leader, saying, “When I saw that which was good among them I was desirous that they should not be destroyed”. The leader, “being an austere and a blood-thirsty man” , ordered Zeniff’s execution, thus causing an intense battle in which all but fifty of the contingent perished.

Having survived, Zeniff returned to Zarahemla for a time; however, “being over-zealous to inherit the land of our fathers” , he reorganized the party and set out again to attain the land of Nephi, then controlled by the Lamanites. He made a treaty with Laman, king of the Lamanites, to occupy a part of the land, not understanding that Laman’s intent was to enslave the Nephites, “that they might glut themselves with the labors of our hands; yea, that they might feast themselves upon the flocks of our fields”. Over a period of several decades, Zeniff and his people labored to preserve and sustain their families through diligence and hard work, while at the same time defending themselves “in the strength of the Lord” against periodic incursions from the Lamanite forces.

Zeniff offers the most comprehensive statement in the Book of Mormon about the traditional Lamanite perspective concerning the Nephites and why the Lamanites cultivated an insatiable desire to kill them. Three beliefs, or misunderstandings, were at the crux. They believed.

Zeniff countered the misinterpretations with the corrective observation that “Nephi was more faithful in keeping the commandments of the Lord—therefore he was favored of the Lord, for the Lord heard his prayers and answered them, and he took the lead of their journey in the wilderness” because his brethren “understood not the dealings of the Lord”. Under this banner of truth, Zeniff, as king in the Nephite colony , was able to lead the people to victory over the Lamanites and preserve at least a semblance of stability and peace for a period of time. This delicate balance between Nephite and Lamanite interests ended to the disadvantage of the colonists soon after Zeniff conferred the kingdom upon his son Noah. Nevertheless, during his days of service, Zeniff remembered the Lord and attempted to guide his people in righteous pathways.

History: The tenure of Zeniff lasted from around 200 BC until around 160 BC, when Noah took over the leadership as the second of the colonial kings. After the dramatic visits of the prophet Abinadi, starting around 150 BC, life in the colony was forever changed. Zeniff’s grandson, Limhi, replaced the deposed and executed Noah around 145 BC. A search party from [Zarahemla led by Ammon later discovered Limhi and his group and, under guidance from the Lord, assisted in returning all of the surviving colonists to Zarahemla around 121 BC. Independently, the group under Alma the Elder was able to reach Zarahemla around a year later.

The last words in the scriptures from Zeniff were a prayer for his people. “And may the Lord bless my people”. That this prayer was answered was later confirmed by King Mosiah in Zarahemla.

And it came to pass that Mosiah did read, and caused to be read, the records of Zeniff to his people; yea, he read the records of the people of Zeniff, from the time they left the land of Zarahemla until they returned again.

And he also read the account of Alma and his brethren, and all their afflictions, from the time they left the land of Zarahemla until the time they returned again.

And now, when Mosiah had made an end of reading the records, his people who tarried in the land were struck with wonder and amazement.

For they knew not what to think; for when they beheld those that had been delivered out of bondage they were filled with exceedingly great joy.