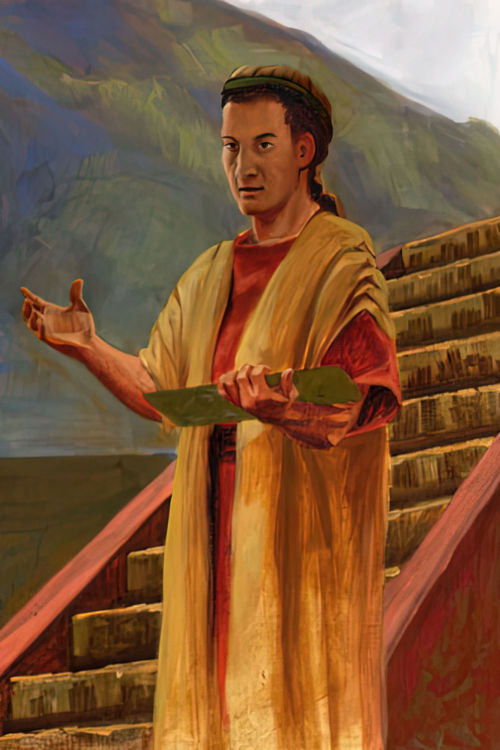 Zeezrom was a lawyer in the city of Ammonihah during the time that Alma and Amulek were preaching repentance to the proud citizens in that part of the land. Zeezrom “was the foremost to accuse Amulek and Alma, he being one of the most expert among them, having much business to do among the people. Now the object of these lawyers was to get gain; and they got gain according to their employ”. The strategy they used to generate business was to “stir up the people to riotings, and all manner of disturbances and wickedness, that they might have more employ, that they might get money according to the suits which were brought before them”. Thus, Zeezrom, “who was expert in the devices of the devil, that he might destroy that which was good” , questioned extensively both Amulek and Alma, confident that he could catch them in contradictory statements that could be turned to their destruction. His favorite stratagem was to attribute to Amulek the false claim that the Son of God “shall not save His people” , whereas Amulek was simply making clear that the Lord could not save people “in their sins” because “he hath said that no unclean thing can enter the kingdom of heaven”.

The more Amulek and Alma expounded the doctrines of Christ and His atoning mission, the more fearful Zeezrom became, trembling increasingly under the burden of his growing awareness that his position was altogether wrong. Then Alma offered Zeezrom a seed of hope as he conveyed words of the Lord. “Therefore, whosoever repenteth, and hardeneth not his heart, he shall have claim on mercy through mine Only Begotten Son, unto a remission of his sins; and these shall enter into my rest”. Zeezrom recognized the truth of the gospel and repented, as did many others who witnessed the testimony of the servants of God.

And it came to pass that Zeezrom was astonished at the words which had been spoken; and he also knew concerning the blindness of the minds, which he had caused among the people by his lying words; and his soul began to be harrowed up under a consciousness of his own guilt; yea, he began to be encircled about by the pains of hell.

And it came to pass that he began to cry unto the people, saying: Behold, I am guilty, and these men are spotless before God. And he began to plead for them from that time forth; but they reviled him, saying: Art thou also possessed with the devil? And they spit upon him, and cast him out from among them, and also all those who believed in the words which had been spoken by Alma and Amulek; and they cast them out, and sent men to cast stones at them.

Alma and Amulek were seized and imprisoned. Many innocent believers were martyred, and others fled to the nearby city of Sidom. The Lord intervened to destroy the prison in an earthquake, commanding the two freed prophets to depart. In Sidom, they learned that Zeezrom lay incapacitated with a burning fever, convinced that the two prophets had been slain as a result of his wickedness. They went to him to comfort and reassure him. After speaking with Zeezrom to confirm his faith in the Lord, Alma gave him a blessing.

O Lord our God, have mercy on this man, and heal him according to his faith which is in Christ.

And when Alma had said these words, Zeezrom leaped upon his feet, and began to walk; and this was done to the great astonishment of all the people; and the knowledge of this went forth throughout all the land of Sidom.

Thereafter Alma baptized Zeezrom, and the new convert “began from that time forth to preach unto the people”. Several years later, Alma called upon Zeezrom to accompany him, along with Amulek and others, to preach to the Zoramites in the land of Antionum. Following this mission, Zeezrom accompanied the group back to Zarahemla.

History: The initial encounter between Zeezrom and Alma and Amulek took place around 82 BC. Zeezrom’s subsequent healing and baptism occurred not long after. The city of Ammonihah, where Zeezrom was active as a lawyer, was destroyed—“in one day” —by Lamanite invaders attacking around 78 BC, thus fulfilling the prophecy of Alma and Amulek before the corrupt citizens. The mission to the Zoramites, in which Zeezrom was a contributor, took place around 74 BC. No further information about Zeezrom is given after his return to Zarahemla.