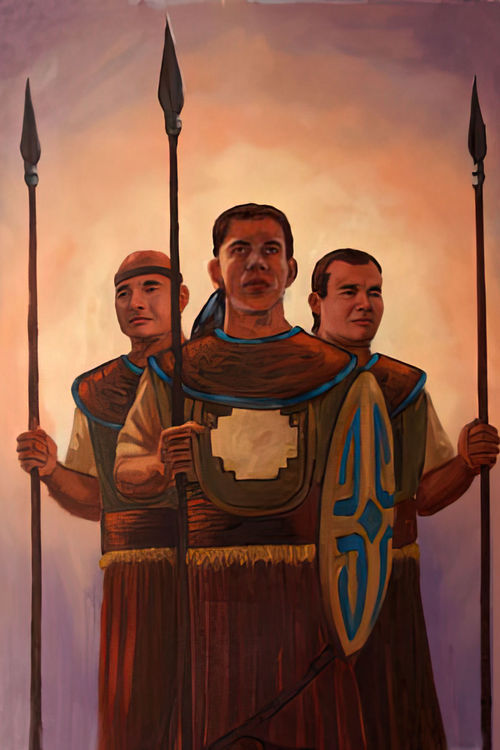 The answer lay in the spirit and courage of the sons of the people of Ammon. These young men had not taken the oath against bearing arms to protect their families.

And now behold, as they never had hitherto been a disadvantage to the Nephites, they became now at this period of time also a great support; for they took their weapons of war, and they would that Helaman should be their leader.

And they were all young men, and they were exceedingly valiant for courage, and also for strength and activity; but behold, this was not all—they were men who were true at all times in whatsoever thing they were entrusted.

Yea, they were men of truth and soberness, for they had been taught to keep the commandments of God and to walk uprightly before him.

And now it came to pass that Helaman did march at the head of his two thousand stripling soldiers, to the support of the people.

These stripling warriors proved to be a decisive factor in the next phase of the battle, as Helaman later reported to Moroni.

And now I say unto you, my beloved brother Moroni, that never had I seen so great courage, nay, not amongst all the Nephites.

For as I had ever called them my sons.

The qualities of faith, trust, courage, obedience, and strength among the “sons of Helaman” helped the Nephite army, led by Antipus, prevail in battle. The young men fought like lions, and soundly defeated the Lamanites. Taking stock of his casualties, Helaman was overjoyed to observe, among the stripling warriors, “there had not one soul of them fallen to the earth; yea, and they had fought as if with the strength of God; yea, never were men known to have fought with such miraculous strength; and with such mighty power did they fall upon the Lamanites, that they did frighten them; and for this cause did the Lamanites deliver themselves up as prisoners of war”.

Soon thereafter, an additional sixty young sons of Ammon joined with Helaman’s warriors to continue the fight for liberty. Again, the decisive factor was the valor and courage of those stripling warriors. “Yea, and they did obey and observe to perform every word of command with exactness; yea, and even according to their faith it was done unto them; and I did remember the words which they said unto me that their mothers had taught them”. Again, not one of these young men perished in battle, although some two hundred received serious wounds.

And now, their preservation was astonishing to our whole army, yea, that they should be spared while there was a thousand of our brethren who were slain. And we do justly ascribe it to the miraculous power of God, because of their exceeding faith in that which they had been taught to believe—that there was a just God, and whosoever did not doubt, that they should be preserved by his marvelous power.

Now this was the faith of these of whom I have spoken; they are young, and their minds are firm, and they do put their trust in God continually.

History: The military campaigns overseen by Moroni took place, generally, in the period from around 74 BC until shortly before 56 BC. The involvement of the 2,000.

Although the military activity of the sons of Helaman lasted only a short time, those young men have remained, even until this day, examples of faith. “They stand fast in that liberty wherewith God has made them free; and they are strict to remember the Lord their God from day to day; yea, they do observe to keep his statutes, and his judgments, and his commandments continually; and their faith is strong in the prophecies concerning that which is to come”.