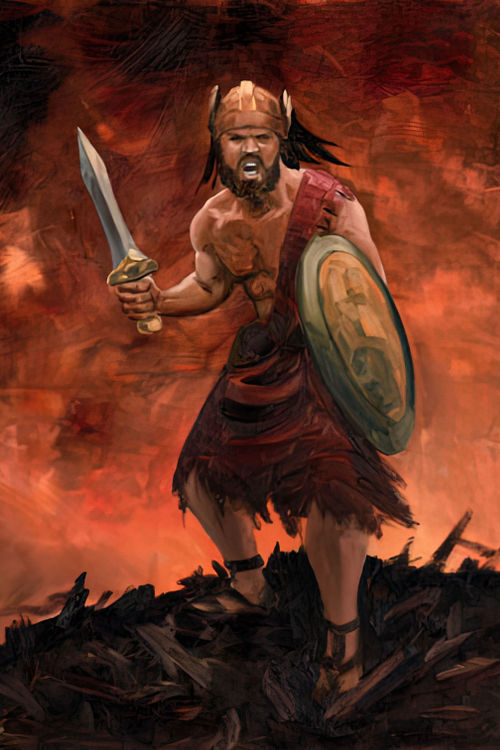 Shiz was the final contender against the embattled Coriantumr, the last of the Jaredite kings. Enraged over the death of his brother, Lib, at the hands of Coriantumr, Shiz vowed to seek revenge. During their ultimate contest, and in the wake of uninterrupted warfare, the land became strewn with the carcasses of the dead, their stench polluting the air. “And thus we see that the Lord did visit them in the fulness of his wrath, and their wickedness and abominations had prepared a way for their everlasting destruction”.

For a brief moment during the endless battle, the wounded Coriantumr remembered the words of warning that the prophet Ether had uttered in his presence—repent or come under the judgments of God. Viewing the massive destruction that lay before him, Coriantumr “began to repent of the evil which he had done; he began to remember the words which had been spoken by the mouth of all the prophets, and he saw them that they were fulfilled thus far, every whit; and his soul mourned and refused to be comforted”. He petitioned Shiz in a letter to accept an offer of peace, according to which he.

Ether watched as the two sides gathered together their armies over the space of four years, and then unleashed their forces in an epic drama. Coriantumr again petitioned Shiz to accept the kingdom and cease the killings. However, by that time neither wisdom nor logic remained.

But behold, the Spirit of the Lord had ceased striving with them, and Satan had full power over the hearts of the people; for they were given up unto the hardness of their hearts, and the blindness of their minds that they might be destroyed; wherefore they went again to battle.

It was the final battle. All but the two leaders and a few surviving companions were slain. “Shiz arose, and also his men, and he swore in his wrath that he would slay Coriantumr or he would perish by the sword”. Shiz knew not only the art of survival, but also the art of war. His reputation among all peoples had been indisputable. “Who can stand before the army of Shiz? Behold, he sweepeth the earth before him!”. But one thing he did not know: that the Lord had decreed that Coriantumr, should he not repent, would be the only one to survive as a witness of the total loss of the Promised Land by his people. Shiz persisted. Having caught up with the fleeing Coriantumr, Shiz fainted at his feet for loss of blood. Only the two remained. After Coriantumr had rested himself for a moment, leaning on his sword, he beheaded his opponent, then fell himself as if he were dead. Not one other living person remained, except Ether.

And the Lord spake unto Ether, and said unto him: Go forth. And he went forth, and beheld that the words of the Lord had all been fulfilled; and he finished his record;... and he hid them in a manner that the people of Limhi did find them.

Coriantumr wandered across the deserted landscape until he was discovered by the descendants of Mulek in the land of Zarahemla, where he dwelt with them “nine moons”. Then, just as Ether had prophesied, leadership was passed from the Jaredites to “another people receiving the land for their inheritance”.