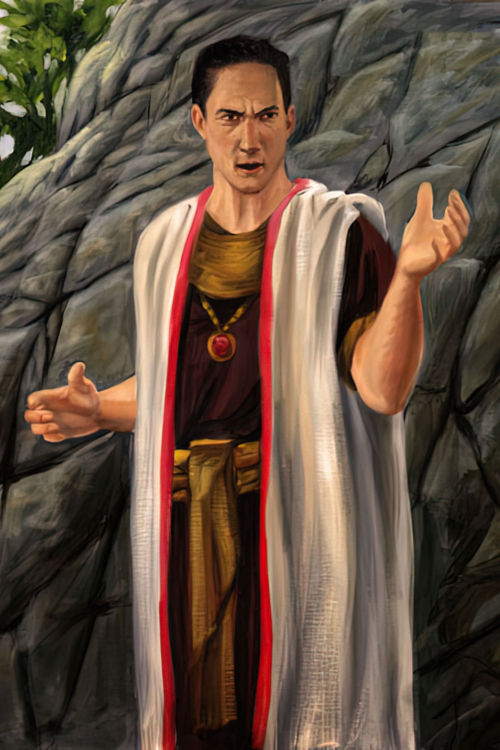 Sherem was a skilled and proud orator during the tenure of the prophet Jacob, the successor of Nephi in the early years of Nephite history. “And he [Sherem] was learned, that he had a perfect knowledge of the language of the people; wherefore, he could use much flattery, and much power of speech, according to the power of the devil”. His message was a total denial of the being and mission of Christ, “for no man knoweth of such things; for he cannot tell of things to come”. Having drawn away many of the people of God, Sherem was called before Jacob, where he attempted to justify his untenable position. “But behold, the Lord God poured in his Spirit into my soul,” declared Jacob, “insomuch that I did confound him in all his words”. When Sherem confirmed that he believed the scriptures, Jacob confronted him boldly.

Then ye do not understand them; for they truly testify of Christ. Behold, I say unto you that none of the prophets have written, nor prophesied, save they have spoken concerning this Christ.

Sherem insisted on a sign to substantiate the gospel position. Through the power of the Lord, he was incapacitated for many days. Following that he arranged for the people to congregate to hear his confession of guilt and his witness about the truthfulness of Christ and the power of the Holy Ghost. After he testified of those things, he died, having committed the unpardonable sin. Jacob rejoiced in the matter as an answer to prayer. “And it came to pass that peace and the love of God was restored again among the people; and they searched the scriptures, and hearkened no more to the words of this wicked man”.