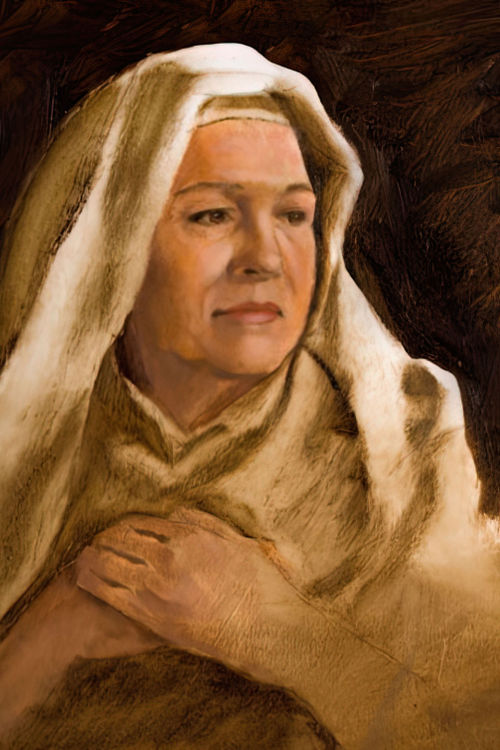 Sariah was the wife of the prophet Lehi and the mother of Nephi and his siblings. Nephi described both his mother and his father in a single word in the opening verse of the Book of Mormon, calling them “goodly”. Upon receiving the commandment of the Lord around 600 BC to flee from Jerusalem, Lehi took Sariah, his beloved wife, and his four sons, Laman, Lemuel, Sam, and Nephi, and departed into the wilderness. This small family circle—augmented soon thereafter with the addition of Zoram, the servant of Laban, and Ishmael and his family—became the foundation for the unfolding of entire nations in the Promised Land. Sariah was thus the ancestral mother of millions of people whose history, as recorded in the Book of Mormon, was to extend more than a thousand years into the future, and in fact continues to this day. Despite severe tribulation during the journey, and despite her anguish over the rebellion of Laman and Lemuel, Sariah remained loyal and faithful to the commission given by the Lord. Though her worries about her children would, on one occasion, cause her to murmur in agony , she remained loyal to her husband in his prophetic calling and carried on faithfully to the end.

History: Only scant details in the Book of Mormon describe Sariah’s life. She was the mother of at least six sons and at least two daughters. She and her husband had enjoyed a prosperous life in Jerusalem, possessing a house, plus gold, silver, and “precious things” —all of which they abandoned when they fled from the doomed city to wander eight years in the wilderness before crossing the ocean. Sariah was a devoted and conscientious mother, grieving over her sons, believing they had been destroyed on their return trip to Jerusalem to obtain the brass plates. “And my sons are no more, and we perish in the wilderness,” she mourned. But Lehi consoled her with the confirmation that the Lord had promised them a new homeland and the assurance that their sons would be protected. When the sons indeed returned safely, both parents rejoiced, and, as Nephi explained, “my mother was comforted”. Sariah then bore testimony. “And she spake, saying: Now I know of a surety that the Lord hath commanded my husband to flee into the wilderness; yea, and I also know of a surety that the Lord hath protected my sons, and delivered them out of the hands of Laban, and given them power whereby they could accomplish the thing which the Lord hath commanded them”. Immediately thereafter she and Lehi offered thanks for the blessings of the Lord. Later, following his dream of the tree of life, Lehi reported having observed his wife, along with Nephi and Sam, partake of the fruit of the tree, “which was desirable above all other fruit”.

During the great ocean voyage, Sariah and her husband, both in their advancing years, were tormented by Laman and Lemuel to such a degree that they were at the point of death. “Yea, their grey hairs were about to be brought down to lie low in the dust; yea, even they were near to be cast with sorrow into a watery grave”. But the intervention of the Lord softened the hearts of Laman and Lemuel so that the voyagers were able to reach the Promised Land safely through the guidance of the Liahona.