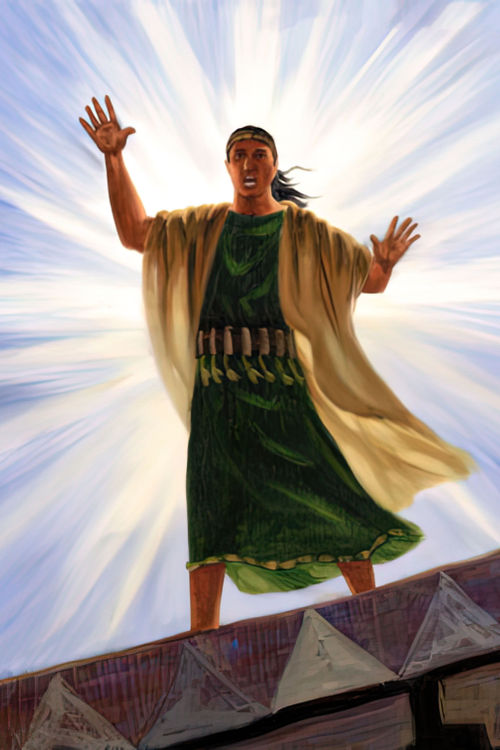 Samuel the Lamanite was sent by the Lord in 6 BC to call the people of Zarahemla to repentance on the eve of the birth of the Savior in the Holy Land. This was a time of political instability and spiritual decline. Even though the prophet Nephi, son of Helaman, had labored mightily to persuade the people to return to the Lord, they soon forgot their promises and “did wax stronger and stronger in their pride, and in their wickedness; and thus they were ripening again for destruction”. Mormon, compiler and abridger of the Book of Mormon, inserted into the narrative at this point his sorrow about the “nothingness of the children of men; yea, even they are less than the dust of the earth... unless they] repent and hearken unto the voice of the Lord their God”.

Into this prideful and idolatrous [Zarahemla, darkened even more by the corruption of the Gadianton robbers, the Lord sent a Lamanite prophet who stood in the capital city of the Nephite nation and sounded an urgent warning that time was running out. Quoting an angel who had been sent to instruct him, Samuel described the Lord’s position with respect to the people.

But blessed are they who will repent, for them will I spare. But behold, if it were not for the righteous who are in this great city, behold, I would cause that fire should come down out of heaven and destroy it.

But behold, it is for the righteous’ sake that it is spared. But behold, the time cometh, saith the Lord, that when ye shall cast out the righteous from among you, then shall ye be ripe for destruction; yea, wo be unto this great city, because of the wickedness and abominations which are in her.

Speaking from atop the city wall, Samuel delivered a comprehensive summary of truth to the people, after which he left an indictment. “But behold, your days of probation are past; ye have procrastinated the day of your salvation until it is everlastingly too late, and your destruction is made sure; yea, for ye have sought all the days of your lives for that which ye could not obtain; and ye have sought for happiness in doing iniquity, which thing is contrary to the nature of that righteousness which is in our great and Eternal Head”.

Still citing the words of the angel of God, Samuel declared the coming signs of the times—“to the intent that ye might believe on his name”. Those signs included a day and a night and a day without darkness at the time of the Savior’s birth, and three days without light between His death and resurrection, accompanied by many hours of catastrophic upheaval across the land beginning at the moment of His death. Following the resurrection of the Lord, declared Samuel, many would rise from their graves and appear to the people. All of these manifestations would confirm the truth of the Atonement of Christ. “Yea, and it bringeth to pass the condition of repentance, that whosoever repenteth the same is not hewn down and cast into the fire; but whosoever repenteth not is hewn down and cast into the fire; and there cometh upon them again a spiritual death, yea, a second death, for they are cut off again as to things pertaining to righteousness”.

Many believed Samuel’s words and sought out Nephi to baptize them into the fold of Christ. “But the more part of them did not believe in the words of Samuel”. Though the Spirit of the Lord had protected him on the wall from the stones and arrows of the unbelievers , Samuel found himself under assault from their captains and was forced to flee back to his own land. “And behold, he was never heard of more among the Nephites; and thus were the affairs of the people”. The sacred record from that time forth confirmed the fulfillment of Samuel’s prophecies.

History: Although Samuel’s appearance was fairly brief, having taken place five years before the predicted sign at the time of the Savior’s birth, his influence and message endured long after his ministry. Nephi, the son of Nephi, who was Samuel’s contemporary, was in office when the period of five years had exactly expired. Amidst the taunting of disbelievers, he heard the voice of the Lord confirming that Samuel’s predicted sign would occur that very night and that His birth would take place on the morrow.