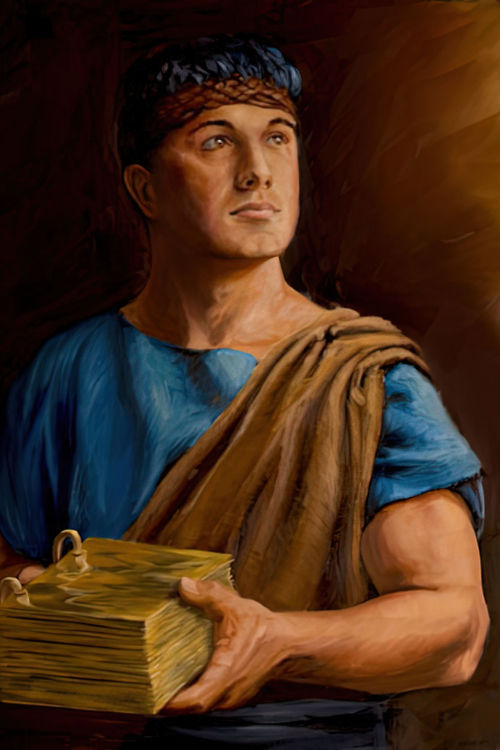 Among the most recognized and admired of the Lord’s prophet-servants, Nephi was an example of faith, obedience, steadfastness, leadership, and valor in upholding a testimony of Jesus Christ as the Redeemer and Savior. Nephi was born in Jerusalem, the son of the prophet Lehi and his wife, Sariah. As a younger contemporary of the prophet Jeremiah, peer of Daniel, and older contemporary of Ezekiel, Nephi was a firsthand observer of the cultural unrest and spiritual decline in the Holy Land just before the destruction of Jerusalem around 587 BC at the hands of the Babylonians. Shortly before this upheaval, Nephi’s father, Lehi, followed the command of the Lord and, having warned the hard-hearted people of the city with the voice of prophecy, took his family and departed into the wilderness about 600 BC.

The journey through the wilderness of what is now Saudi Arabia and then onward via ocean transit to the Promised Land of America chronicles sacrifice and learning—sacrifice of worldly affluence in the pursuit of godly obedience, and learning anchored in the resolve to follow the counsel of God. The young Nephi rose in stature and wisdom to become a leader with multiple missions: colonizer, nation-builder, historian, teacher and preserver of the word of God, spiritual leader, temple-builder, prophet, and family man.

History: Nephi’s physical and spiritual stature are described in the books of First and Second Nephi. Large in stature and mighty in spirit, Nephi was grateful to be “favored of the Lord” , having been granted a noble parentage and a keen understanding of God’s goodness and mercy. He continually studied and pondered the scriptures—including his father’s own record—and kept a faithful journal of historical matters on the larger metal plates and spiritual matters on smaller plates. Nephi was promised by the Lord that he would be a ruler over his older brothers, Laman and Lemuel , and he stood firm on gospel principles in the face of their taunting and rebellion. When the Lord prompted Lehi to send his sons back to Jerusalem to obtain the brass plates of Laban, containing the holy record of God’s dealing with His chosen people to that time, Nephi was willing to obey.

I will go and do the things which the Lord hath commanded, for I know that the Lord giveth no commandments unto the children of men, save he shall prepare a way for them that they may accomplish the thing which he commandeth them.

True to his faith, Nephi guided his older brothers in the successful quest to obtain the records, although it was required of him by the Spirit of God to do the unthinkable in slaying Laban. As the Spirit declared, “It is better that one man should perish than that a nation should dwindle and perish in unbelief”. Because of Nephi, Laban’s servant Zoram was persuaded to join the emigrating group; later, Nephi and his brothers also persuaded Ishmael and his family to leave Jerusalem and join them, thus providing the eventual family ties for raising up seed unto God in the New World.

Throughout these missions, Nephi endured constant haranguing and assaults from his older brothers. It was only through the power of God that his life was spared to complete his ministry of service to his people. Offsetting his suffering and severe persecution, however, was his delight in listening to his father recount the experience of being granted a panoramic view of God’s deeds of mercy and loving kindness toward His children. Nephi desired deeply to have these same kinds of spiritual revelations. Upon the deaths of Lehi and Sariah, Nephi carried on the work of the Lord in the New World as part of the lineage of Joseph of Egypt, son of Jacob and saw to it that his people lived “after the manner of happiness”. He explained the doctrine of multiple witnesses of the truth, merging his own testimony with that of his brother Jacob and the prophet Isaiah to the effect that all three had been privileged to see the Lord. Nephi delighted in proving the divinity of Christ’s mission and the efficacy of the plan of redemption. “I glory in plainness.” he said. “I glory in truth; I glory in my Jesus, for he hath redeemed my soul from hell”. Nephi prophesied continually about the coming judgments of God—either to the eternal blessing and exaltation of the faithful or to the eternal condemnation and punishment of the disobedient.

Wherefore, ye must press forward with a steadfastness in Christ, having a perfect brightness of hope, and a love of God and of all men. Wherefore, if ye shall press forward, feasting upon the word of Christ, and endure to the end, behold, thus saith the Father: Ye shall have eternal life.

Nephi labored all his days for the defense and welfare of his people. His followers not only admired him, but gloried in his example of integrity. At the end of his long tenure as prophet and leader, Nephi again counseled to “feast upon the words of Christ” and “receive the Holy Ghost,” thereby knowing of the Lord what should be done to have eternal life and salvation. In the latter days, the Lord has renewed this promise to those who embark on a mission to harvest souls unto God: “Open your mouths and they shall be filled, and you shall become even as Nephi of old, who journeyed from Jerusalem in the wilderness”. Before Nephi died, he empowered his brother Jacob to succeed him as spiritual leader and keeper of the sacred records.

Modern Testimony: Nephi’s example of righteousness continues to hold universal appeal across all age groups and cultural boundaries. Though renowned among his people, Nephi always preserved his humility and his ability to look to God for guidance and deliverance. President Howard W. Hunter, in his writing, used Nephi as an example.

If the limelight of popularity should fall on you sometime in your life, it might be well for you to follow the example of those in the scriptures who received fame. Nephi is one of the great examples. After all he accomplished traveling in the wilderness with his family, his attitude was still fixed on the things that matter most (Gordon B. Hinckley, “Let Us Move This Work Forward,” Ensign, Nov. 1985, 83).