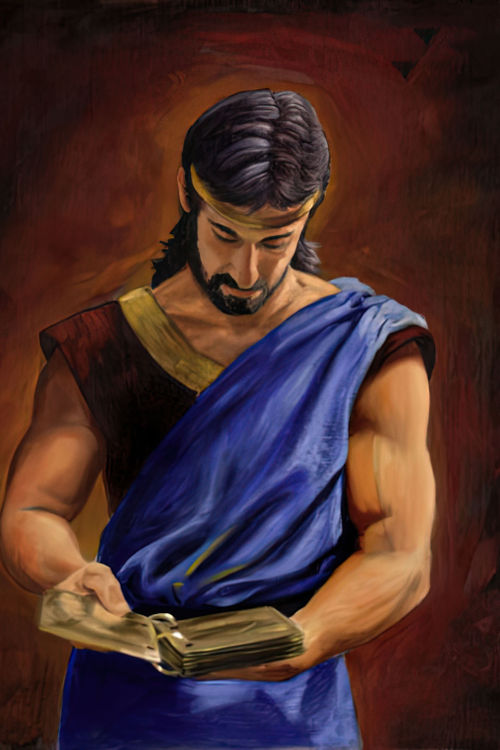 Mosiah, son of King Benjamin, was the last of the Nephite kings, serving from around 124 BC to 92 BC. His record of love and righteous leadership earned the deep respect and love of his people. “And they did wax strong in love towards Mosiah; yea, they did esteem him more than any other man; for... he had established peace in the land, and he had granted unto his people that they should be delivered from all manner of bondage; therefore they did esteem him, yea, exceedingly, beyond measure”.

Mosiah was trained in the ways of the Lord by his father King Benjamin, who taught his sons the importance of preserving and following the sacred records handed down from generation to generation.

I say unto you, my sons, were it not for these things, which have been kept and preserved by the hand of God, that we might read and understand of his mysteries, and have his commandments always before our eyes, that even our fathers would have dwindled in unbelief, and we should have been like unto our brethren, the Lamanites, who know nothing concerning these things, or even do not believe them when they are taught them, because of the traditions of their fathers, which are not correct....

The Lord blessed Mosiah with the calling of seership, giving him the gift to interpret ancient and unfamiliar languages through miraculous means. Mosiah used this gift to translate the ancient records of the Jaredites discovered by the people of Limhi of the Nephite colony established among the Lamanites. The Book of Mormon account offers insights concerning Mosiah. “A seer is a revelator and a prophet also; and a gift which is greater can no man have, except he should possess the power of God, which no man can; yet a man may have great power given him from God. But a seer can know of things which are past, and also of things which are to come, and by them shall all things be revealed,... Thus God has provided a means that man, through faith, might work mighty miracles; therefore he becometh a great benefit to his fellow beings”.

Mosiah’s gift benefited the people of his day because it enabled them to know the history of God’s peoples over the ages and the consequences of their choices in life—whether good or evil. Thus, “it gave them much knowledge, in the which they did rejoice” , just as it can the people of today.

In addition to his gift as seer, Mosiah exemplified wisdom and leadership. He gave authority to Alma the Elder, who had shortly before arrived from the colony in the land of Nephi, to organize and administer seven congregations of the Church in Zarahemla. Mosiah also received permission from the Lord to allow his sons, Ammon, Aaron, Omner, and Himni—like Alma the Younger reformed from their earlier assaults on the Church—to embark on their fourteen-year mission among the Lamanites. Mosiah served as champion of equality among his people, becoming at the end of his reign the originator of a program to have governing judges, rather than kings, appointed by the voice of the people to preserve order and liberty.

For behold, how much iniquity doth one wicked king cause to be committed, yea, and what great destruction!...

Therefore, choose you by the voice of this people, judges, that ye may be judged according to the laws which have been given you by our fathers, which are correct, and which were given them by the hand of the Lord.

In all things, Mosiah was faithful and devoted to the Lord. “And it came to pass that king Mosiah did walk in the ways of the Lord, and did observe his judgments and his statutes, and did keep his commandments in all things whatsoever he commanded him”.

History: During his benedictory address about 124 BC, Benjamin announced that his son Mosiah had taken over the reigns of government as the new king. He also gave Mosiah charge over the sacred records and associated instruments. Mosiah died about 92 BC at age sixty-three, having reigned for nearly thirty-three years. The first of the elected judges of the people of Nephi under Mosiah’s new program was Alma the Younger, who served as chief judge and was, like his father before him, high priest.