Son of Mormon², last of Nephites 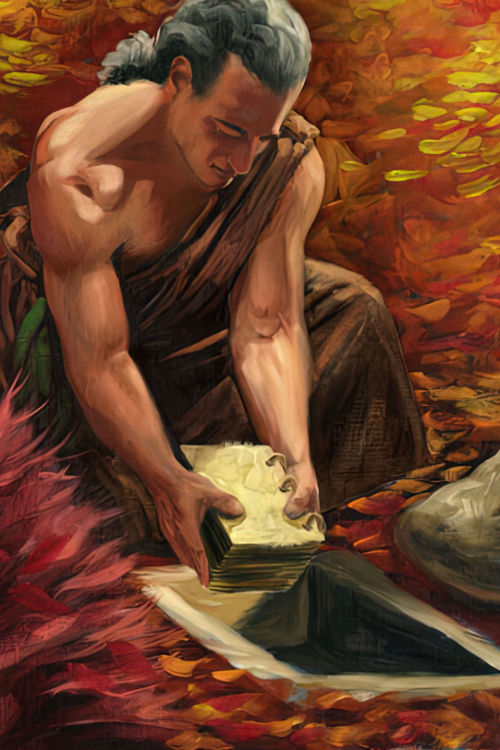 Moroni, whose image appears on spires of modern-day temples of the Church throughout the world, was the angelic messenger who visited the young Joseph Smith for the first time on September 21, 1823, to inaugurate the era of the coming forth of the Book of Mormon. Moroni, son of Mormon, spent his last years in mortality protecting and adding to the ancient records given him by his father, Mormon, before burying them in a vault on the crest of the Hill Cumorah. His valuable additions to the text include chapters eight and nine of his father’s section known as the Book of Mormon, the abridgement that he. He also wrote the title page for the entire book, which makes clear that the work is designed for “the convincing of the Jew and Gentile that Jesus is the Christ, the Eternal God, manifesting himself unto all nations.”

Moroni was entrusted with the keys of restoring the divine message of hope and exaltation in the latter days. He was viewed in vision by John the Revelator.

And I saw another angel fly in the midst of heaven, having the everlasting gospel to preach unto them that dwell on the earth, and to every nation, and kindred, and tongue, and people,

Saying with a loud voice, Fear God, and give glory to him; for the hour of his judgment is come: and worship him that made heaven, and earth, and the sea, and the fountains of waters.

Moroni’s message combined certainty in the mission of Christ, faith in the power of the gospel to bring about spiritual rejuvenation leading to a reconciliation with God, and hope for the gift of eternal life and exaltation. He repeatedly taught charity, the blessings of the Holy Spirit, and the grace of God. Despite his power as an orator, Moroni recognized his own weakness in writing about the eternal principles of the gospel.

And thou hast made us that we could write but little, because of the awkwardness of our hands. Behold, thou hast not made us mighty in writing like unto the brother of Jared, for thou madest him that the things which he wrote were mighty even as thou art, unto the overpowering of man to read them.

Thou hast also made our words powerful and great, even that we cannot write them; wherefore, when we write we behold our weakness, and stumble because of the placing of our words; and I fear lest the Gentiles shall mock at our words.

The Lord assured him that “if men come unto me I will show unto them their weakness. I give unto men weakness that they may be humble; and my grace is sufficient for all men that humble themselves before me; for if they humble themselves before me, and have faith in me, then will I make weak things become strong unto them”. Moroni then reassured present and future readers of the Book of Mormon. “Yea, come unto Christ, and be perfected in him, and deny yourselves of all ungodliness; and if ye shall deny yourselves of all ungodliness, and love God with all your might, mind and strength, then is his grace sufficient for you, that by his grace ye may be perfect in Christ; and if by the grace of God ye are perfect in Christ, ye can in nowise deny the power of God”. Moroni also testified how, through the power of God, one might know the truth of the Book of Mormon.

And when ye shall receive these things, I would exhort you that ye would ask God, the Eternal Father, in the name of Christ, if these things are not true; and if ye shall ask with a sincere heart, with real intent, having faith in Christ, he will manifest the truth of it unto you, by the power of the Holy Ghost.

And by the power of the Holy Ghost ye may know the truth of all things.

History: Moroni lived from around AD 350 until his death around AD 421. He and his father, Mormon, had experienced the cataclysmic battle of nations at Cumorah around AD 385 where nearly a quarter million Nephite warriors were slain, including the ten thousand commanded by Moroni. Mormon himself was slain shortly thereafter by the Lamanites. Thus, Moroni was left alone for the better part of thirty-five years, wandering about the land to protect his own life during a period of universal warfare among the Lamanite factions. “For behold, their wars are exceedingly fierce among themselves; and because of their hatred they put to death every Nephite that will not deny the Christ. And I, Moroni, will not deny the Christ; wherefore, I wander whithersoever I can for the safety of mine own life”. Moroni devoted his final years to preserving and adding to the sacred records. “I even remain alone to write the sad tale of the destruction of my people. But behold, they are gone, and I fulfil the commandment of my father. And whether they will slay me, I know not”.

Amidst the bleakness of his lonely existence, Moroni was sustained by the Spirit of God. His strength in the Lord derived from a confirmation of the mission given him to speak eternal truth to future generations who would face the challenge of overcoming pride and embracing the plan of happiness. “Behold, I speak unto you as if ye were present, and yet ye are not. But behold, Jesus Christ hath shown you unto me, and I know your doing”. In benediction he counseled, “O then despise not, and wonder not, but hearken unto the words of the Lord, and ask the Father in the name of Jesus for what things soever ye shall stand in need. Doubt not, but be believing, and begin as in times of old, and come unto the Lord with all your heart, and work out your own salvation with fear and trembling before him”. Moroni also testified to the future servant of God, Joseph Smith, who would be called to translate the sacred records in the latter days. “And in the mouth of three witnesses shall these things be established; and the testimony of three, and this work, in the which shall be shown forth the power of God and also his word, of which the Father, and the Son, and the Holy Ghost bear record—and all this shall stand as a testimony against the world at the last day”.

During Moroni’s solitary years, he added to the sacred records invaluable information about Church administration as taught to the people by the resurrected Christ ; second, an epistle on the falsehood of infant baptism ; and third, another epistle reporting the atrocities rampant among the wicked, but then adding a fatherly blessing in consolation.

My son, be faithful in Christ; and may not the things which I have written grieve thee, to weigh thee down unto death; but may Christ lift thee up, and may his sufferings and death, and the showing his body unto our fathers, and his mercy and long-suffering, and the hope of his glory and of eternal life, rest in your mind forever.

And may the grace of God the Father, whose throne is high in the heavens, and our Lord Jesus Christ, who sitteth on the right hand of his power, until all things shall become subject unto him, be, and abide with you forever. Amen.

At the end of his career, Moroni addressed his future readership.

And now I, Moroni, bid farewell unto the Gentiles, yea, and also unto my brethren whom I love, until we shall meet before the judgment-seat of Christ, where all men shall know that my garments are not spotted with your blood.

And then shall ye know that I have seen Jesus, and that he hath talked with me face to face, and that he told me in plain humility, even as a man telleth another in mine own language, concerning these things.

His last words, the final words of the Book of Mormon, declared that he would indeed be on hand at the judgment bar of God following the resurrection to meet each of his readers in person. “And now I bid unto all, farewell. I soon go to rest in the paradise of God, until my spirit and body shall again reunite, and I am brought forth triumphant through the air, to meet you before the pleasing bar of the great Jehovah, the Eternal Judge of both quick and dead. Amen”.