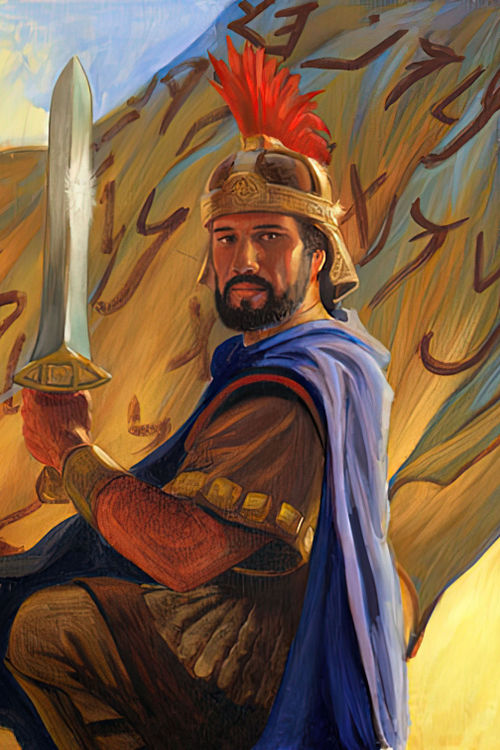 Moroni was chief commander of the Nephite armies from around 74 BC until his retirement, not long before his death in 56 BC. The scriptures confirm the character of this man.

And Moroni was a strong and a mighty man; he was a man of a perfect understanding; yea, a man that did not delight in bloodshed; a man whose soul did joy in the liberty and the freedom of his country, and his brethren from bondage and slavery;

Yea, a man whose heart did swell with thanksgiving to his God, for the many privileges and blessings which he bestowed upon his people; a man who did labor exceedingly for the welfare and safety of his people.

Moroni is best known in connection with the “title of liberty,” a movement to galvanize the people into an active engagement for the unified defense of their families, their religion, and their freedom against tyranny and oppression. Moroni rent his coat and wrote an inscription upon a piece of it: “In memory of our God, our religion, and freedom, and our peace, our wives, and our children”. This banner, or “title of liberty,” he fastened to a pole and displayed among the people as an ensign of faith in God and commitment to the cause of freedom. Moroni then declared, “Behold, whosoever will maintain this title upon the land, let them come forth in the strength of the Lord, and enter into a covenant that they will maintain their rights, and their religion, that the Lord God may bless them”.

As a result of Moroni’s leadership, the people were able to take an effective stand against the “king-men” and their successors, who, in league with the Lamanites, labored to overthrow the free government in favor of a dictatorship. Moroni’s campaign required years of planning and action within the context of seeking the guidance and blessing of God. Helaman. Mormon said of Moroni, “Yea, verily, verily I say unto you, if all men had been, and were, and ever would be, like unto Moroni, behold, the very powers of hell would have been shaken forever; yea, the devil would never have power over the hearts of the children of men”.

History: Moroni was only twenty-five years old when he was appointed chief captain over the Nephite armies. His contemporaries included Alma, from whom he early sought the Lord’s advice concerning the conduct of the campaign to protect the people against the Lamanites ; Alma’s son Helaman, a powerful ally in the war for liberty and organizer and leader of the 2,000 sons of Lamanite converts beginning around 64 BC; and Pahoran, the governor at Zarahemla, to whom Moroni sent a scathing epistle around 62 BC when he urgently needed assistance from the central government was not forthcoming. But Pahoran wrote back that the government had been displaced by traitors and appealed for Moroni’s rapid assistance. Said Pahoran, in his letter, “And now, in your epistle you have censured me, but it mattereth not; I am not angry, but do rejoice in the greatness of your heart. I, Pahoran, do not seek for power, save only to retain my judgment-seat that I may preserve the rights and the liberty of my people. My soul standeth fast in that liberty in the which God hath made us free”.

Once Moroni understood both Pahoran’s situation and philosophy, he offered his full support to the chief judge because Moroni shared the same convictions. “Yea, and he [Moroni] was a man who was firm in the faith of Christ, and he had sworn with an oath to defend his people, his rights, and his country, and his religion, even to the loss of his blood”. Moroni and the Nephite army restored peace in the land after a successful series of campaigns that lasted about eighteen years. Then, shortly before 56 BC, “Moroni yielded up the command of his armies into the hands of his son, whose name was Moronihah; and he retired to his own house that he might spend the remainder of his days in peace”.