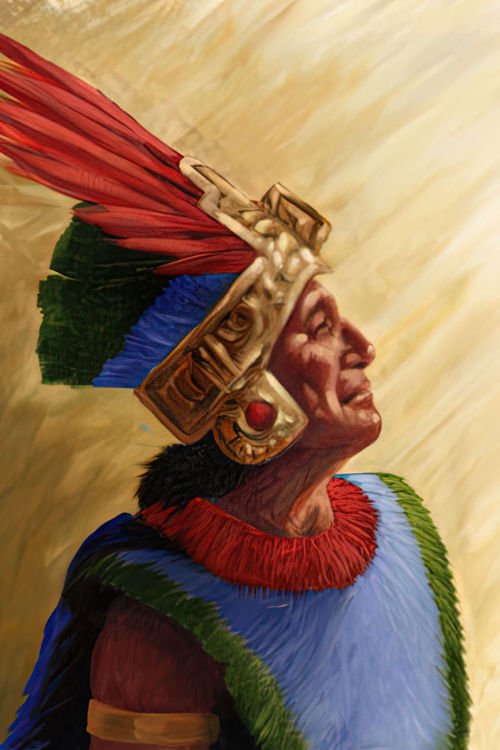 The king over all the Lamanite territories at the time of the fourteen-year mission of the sons of Mosiah remains unnamed in the text of the Book of Mormon. He is referred to simply as “the father of Lamoni.” Lamoni was the lesser Lamanite king converted, along with his wife and his court, through the devoted labors of Ammon , tried to take Ammon’s life. But Ammon was able to overpower the king and soften his heart through “the great love he Ammon] had for his son”. This set the stage for the king’s later conversion through the ministry of Aaron, who was “led by the Spirit to the [land of Nephi, even to the house of the king which was over all the land”.

Having been prepared by Ammon, the king was easily entreated by the words of Aaron, who “began from the creation of Adam, reading the scriptures unto the king” and explaining the nature of God and the atoning mission of the Savior. “What shall I do that I may have this eternal life of which thou hast spoken?” asked the king.

Yea, what shall I do that I may be born of God, having this wicked spirit rooted out of my breast, and receive his Spirit, that I may be filled with joy, that I may not be cast off at the last day? Behold, said he, I will give up all that I possess, yea, I will forsake my kingdom, that I may receive this great joy.

In response, Aaron counseled, “If thou desirest this thing, if thou wilt bow down before God, yea, if thou wilt repent of all thy sins, and will bow down before God, and call on his name in faith, believing that ye shall receive, then shalt thou receive the hope which thou desirest”. The king willingly complied, bowing himself down before the Lord in humility to make a remarkable commitment. “I will give away all my sins to know thee, and that I may be raised from the dead, and be saved at the last day”. Immediately, the king fell to the ground unconscious, a state that the queen misinterpreted as death. To quell her fears, Aaron put forth his hand and raised the king up from the earth so that he received his strength once again and began to minister unto them—“insomuch that his whole household were converted unto the Lord”. The king then sent a proclamation declaring religious liberty throughout the land, with the result that many thousands were converted by Aaron and his colleagues and many churches were set up on behalf of the people.

At the end of his days, the father of Lamoni conferred the kingdom upon his son, whom he named Anti-Nephi-Lehi.

History: The missionary labors of the sons of Mosiah—Ammon, Aaron, Omner, and Himni—took place approximately 90 to 77 BC. It was at the end of this period that the father of Lamoni saw the wisdom of separating his enlightened followers from the traditionalists who remained hard-hearted. Therefore, he and his fellow converts took upon themselves a name that would thereafter distinguish them from their brethren. They chose the name “Anti-Nephi-Lehies” , superseding the name Lamanites. After much persecution from their brethren, the converts were accepted into the Nephite territories and given their own homeland in the land of Jershon. There they were known by the Nephites as “the people of Ammon”. The conflict between the Nephites and the traditional Lamanites continued (refer to entry on the Two Thousand Stripling Warriors), but a significant portion of the Lamanites had been added to the fold of the Lord.