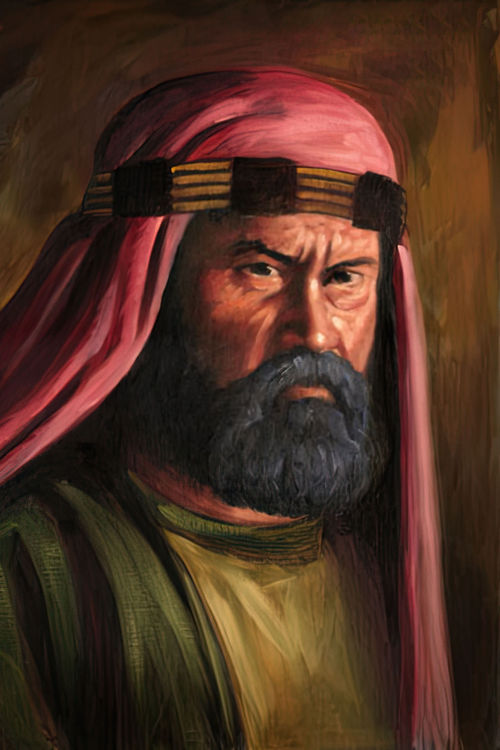 Laman, the eldest son of Lehi, remains a model of murmuring and deception. He rejected the light of the gospel of Jesus Christ and was therefore subjected by choice to the ultimate penalty of being “cast off from the presence of the Lord”.

When Lehi heeded the warnings of the Lord and took his family into the wilderness around 600 BC to avoid the impending destruction of Jerusalem, Laman joined with his brother Lemuel in accusing Lehi of being a “visionary man” who “had led them out of the land of Jerusalem, to leave the land of their inheritance, and their gold, and their silver, and their precious things, to perish in the wilderness. And this they said he had done because of the foolish imaginations of his heart”. Thus, Laman and his brother demonstrated a preference for earthly rather than heavenly treasures. Moreover, they were jealous of the leadership and strength of their younger brother Nephi. “We will not that our younger brother shall be a ruler over us”. Because of this, they tortured Nephi and tried to take his life, just as they sought to kill their own father. Nephi’s words to his brothers describe them. “Wherefore, the Lord commanded my father that he should depart into the wilderness; and the Jews also sought to take away his life; yea, and ye also have sought to take away his life; wherefore, ye are murderers in your hearts and ye are like unto them”.

A sad irony in the Book of Mormon is that even the descendants of Nephi, when they eventually succumbed to the devastating forces of pride, became cast off and lost, just as the descendants of Laman had. “Behold, the pride of this nation, or the people of the Nephites, hath proven their destruction”. In contrast, the Lamanites, when they embraced the gospel with full heart, as had the Anti-Nephi-Lehi converts of Ammon and his brethren. But immediately thereafter, the two older brothers began to murmur again. They were unperturbed later when the Lord strengthened Nephi to burst the bands with which they had restrained him. It was only the pleading of Ishmael’s wife and one of her daughters and one of her sons that induced them to spare Nephi’s life and ask his forgiveness—at least temporarily. Even when Laman was soon thereafter severely chastened by the voice of the Lord for his continual murmuring and plotting against Nephi , this had no lasting effect. During preparations for the ocean journey, Laman and Lemuel attempted to murder Nephi, who responded in the strength of the Lord.

I spake unto them, saying: In the name of the Almighty God, I command you that ye touch me not, for I am filled with the power of God, even unto the consuming of my flesh; and whoso shall lay his hands upon me shall wither even as a dried reed; and he shall be as naught before the power of God, for God shall smite him.

When Laman and Lemuel shrank back in fear, the Lord commanded Nephi to reach out and touch them so that He could shock their hardened hearts. Their response was to fall down and mistakenly worship Nephi, a teaching moment he used to good advantage.

Again, during the ocean voyage, they bound Nephi, treating him with scorn and abuse, and causing the Liahona compass to cease working and the ship to drift into a violent tempest. The grief and pleadings of the aging parents and other family members failed to soften the hearts of the brothers. “And there was nothing save it were the power of God, which threatened them with destruction, could soften their hearts; wherefore, when they saw that they were about to be swallowed up in the depths of the sea they repented of the thing which they had done, insomuch that they loosed me”.

After their safe arrival in the Promised Land, Laman and Lemuel continued their rebelliousness, despite blessings and counsel from their father, Lehi. Following the death of Lehi, their anger against Nephi increased to the extent that they once more attempted to take his life, claiming that he had usurped their rightful place as rulers in the family. At that point, Nephi and his group followed the command of the Lord by departing to pursue their own existence away from the influence of Laman and Lemuel. Thereafter the Book of Mormon becomes the history of two nations—the Nephites and the Lamanites—and their interactions and experiences.

Laman’s life depicts persistent and consistent hardness of heart. In comparison, Nephi possesses the soft and willing heart—one that is easily entreated and ever prepared to follow the commandments of the Lord. The theme of hardness and softness pervades the Book of Mormon.