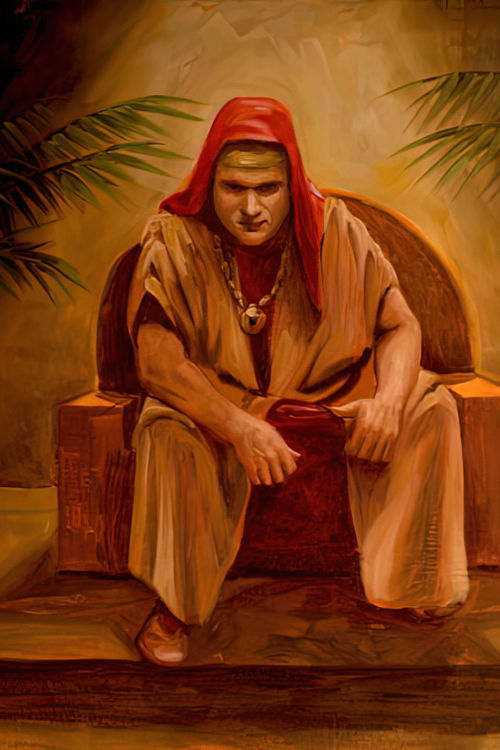 Laban, a descendant of Joseph of Egypt, was living in Jerusalem at the time of Lehi’s exodus. Laban and his forefathers had kept the records of their progenitors on plates of brass, beginning with the creation of the world and continuing through Adam, Moses, and the other holy prophets down to the time of Jeremiah, the contemporary of Zedekiah, who was at the time king of Judah. It was therefore essential that Lehi have the records to take with him to the Promised Land to preserve both the religion and the language of his people. In accordance with the Lord’s commandment, Lehi sent his sons to retrieve the plates of brass from Laban so that they might have a genealogy of their ancestors and the written record of God’s commandments. Laban refused to comply, threatening Laman with his life. When Nephi attempted next to purchase the records using the family treasures, Laban seized the valuables and sent his servants to slay the sons of Lehi.

Laman and Lemuel rebelled at that point, and it was only through the intercession of an angel that the four sons were able to continue their assignment. Thereafter, Nephi, complying with the Lord’s commandment, went forth to slay Laban and obtain the records. Although Nephi had never before taken a human life, the Spirit told him, “Behold the Lord slayeth the wicked to bring forth his righteous purposes. It is better that one man should perish than that a nation should dwindle and perish in unbelief”. Realizing that the salvation of his people depended on those written records, Nephi then slew Laban, using Laban’s own sword. Disguised in his victim’s clothing, Nephi then convinced Zoram, Laban’s servant, to join his family, and they returned, with the records, to Lehi and his wife.