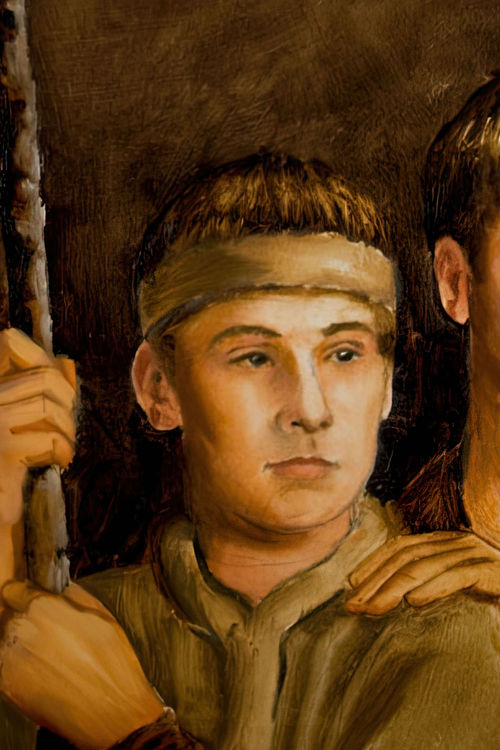 Joseph was the youngest of the sons of Lehi and Sariah, having been born in the wilderness like his older brother Jacob. His family experiences were defined by severe contrasts—the example of righteous parents and brothers Nephi, Sam, and Jacob on the one hand; the rebellious and wicked behavior of older brothers Laman and Lemuel on the other hand. As a youth, Joseph endured great sorrow stemming from his family situation.

Because of their the parents’] grief and much sorrow, and the iniquity of my brethren, they were brought near even to be carried out of this time to meet their God; yea, their grey hairs were about to be brought down to lie low in the dust; yea, even they were near to be cast with sorrow into a watery grave.

And Jacob and Joseph also, being young, having need of much nourishment, were grieved because of the afflictions of their mother; and also my wife with her tears and prayers, and also my children, did not soften the hearts of my brethren that they would loose me.

Later, Lehi gave his son Joseph a father’s blessing in which he referred to the promises of the ancient patriarch, Joseph of [Egypt, as preserved on the plates of brass. “And now, Joseph, my last-born, whom I have brought out of the wilderness of mine afflictions, may the Lord bless thee forever, for thy seed shall not utterly be destroyed. For behold, thou art the fruit of my loins; and I am a descendant of Joseph who was carried captive into Egypt. And great were the covenants of the Lord which he made unto Joseph”. Lehi promised his son that he would participate in the Lord’s design, foretold by Joseph of old, to raise up a righteous branch of Israel that would preserve the word of God, that it might come forth in the latter days as a further confirmation of the divine mission of the Redeemer. Furthermore, he prophesied that the prophet of the Restoration would be a seer like unto Joseph of Egypt, having the same name, and being called of God to do marvelous things on behalf of the covenants between God and His children. “And now, blessed art thou, Joseph. Behold, thou art little; wherefore hearken unto the words of thy brother, Nephi, and it shall be done unto thee even according to the words which I have spoken. Remember the words of thy dying father. Amen”.

Joseph followed his father’s admonitions. He accompanied Nephi and his righteous followers as they separated themselves from the wickedness of Laman and Lemuel and established a secure place where they could “live after the manner of happiness”. Jacob and Joseph were both later consecrated by Nephi as priests and teachers and devoted their lives to building up of the kingdom of God.