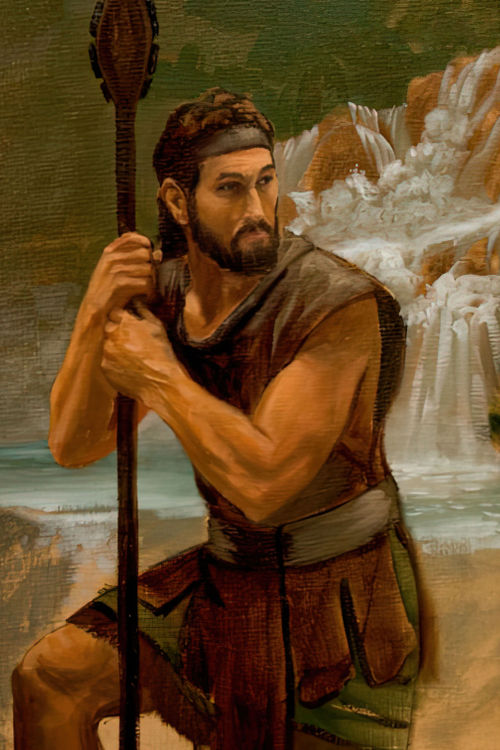 Gideon followed a pattern of standing firm against those who acted contrary to the laws of God and violated the rights of God’s children. The Book of Mormon relates three separate occasions where he rose up to take action against evil: once in opposition to the abuses of wicked King Noah, subsequently in devising a successful plan to liberate the people of Limhi from Lamanite bondage, and finally in defying the false doctrines preached by Nehor in Zarahemla during the first year of the reign of Alma as chief judge of the land. It was in this last episode that Gideon gave his life in defending the truth, for he was unable—“being stricken with many years” —to withstand the lethal blows inflicted upon him by Nehor.

History: Gideon was a strong military leader in the army of King Noah, the wicked leader of the Nephite colony in the Lamanite territories. Alma the Elder, a member of the king’s court, heeded the words of the prophet Abinadi by renouncing Noah’s philosophy of debauchery. Alma was forced to flee into the wilderness with his devout followers. The king sent his army to capture them, but the mission proved unsuccessful, and the army returned to a people sharply divided in their loyalty to the throne. Around 145 BC, Gideon led a revolt against the abuses of the king and attempted to slay him, but the plan was interrupted by an invasion of the Lamanites. Noah escaped along with his inner circle, who subsequently ended the king’s life by fire—fulfilling Abinadi’s prophecy. The successor king, Noah’s son Limhi, later heeded Gideon’s advice to disable their Lamanite guards with drunkenness and thus gained freedom for the people to return to Zarahemla. At Zarahemla, Gideon became a teacher of the people in the church of God. In that capacity, he challenged the arrogant zealot Nehor around 91 BC by withstanding him “with the words of God”. Nehor slew Gideon with the sword and, though renouncing his false philosophy, was found guilty by Alma of the crimes of priestcraft and murder and put to death.