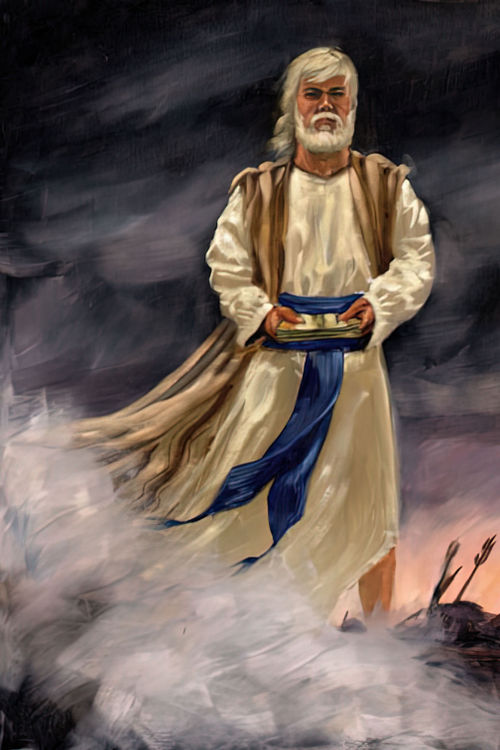 Just as the brother of Jared was the first of the Jaredite prophets, having faith so strong that he was permitted to see Jesus in His spiritual frame, Ether was the last of the Jaredite prophets (some 1,500 years later), having faith so strong that “he could not be restrained because of the Spirit of the Lord which was in him” (Ether 12:2). Because of Ether’s great faith and desire to serve, he did cry from the morning, even until the going down of the sun, exhorting the people to believe in God unto repentance lest they should be destroyed, saying unto them that by faith all things are fulfilled—

Wherefore, whoso believeth in God might with surety hope for a better world, yea, even a place at the right hand of God, which hope cometh of faith, maketh an anchor to the souls of men, which would make them sure and steadfast, always abounding in good works, being led to glorify God (Ether 12:3–4).

The people rejected Ether’s words because their hearts were turned toward things of this world. While Ether’s message evoked a glorious future in which the New Jerusalem would be established in the New World as a sanctuary of the Lord “unto the remnant of the seed of Joseph” (Ether 13:6), and the former Jerusalem would be restored as “a holy city of the Lord . . . unto the house of Israel” (Ether 13:5), Ether’s people could see no further than their own wretched, war-torn conditions. So perilous, in fact, was Ether’s situation, that he had to hide himself in the cavity of a rock by day and venture forth to make his observations only at night. Just as Moroni witnessed the entire destruction of the Nephite nation because of wickedness, Ether witnessed the same fate of his own Jaredite nation. In his hiding place in the cavity of a rock, Ether recorded all of the events and hid up the record in a place where later it would be discovered by Limhi (Ether 15:33; compare Mosiah 8:9).

History: Ether’s ministry in the northern part of the land during the final scenes of Jaredite history was most likely contemporaneous with the ministry of Jacob, brother of Nephi, in the southern part of the land, perhaps around 500 bc. The last of the Jaredite rulers, Coriantumr, was discovered by the people of Zarahemla (the Mulekites) and spent “nine moons” among them (Omni 1:21). It was this same Coriantumr to whom the Lord had sent Ether with an ultimate warning to repent or “otherwise they should be destroyed, and all his household save it were himself. And he should only live to see the fulfilling of the prophecies which had been spoken concerning another people receiving the land for their inheritance; and Coriantumr should receive a burial by them; and every soul should be destroyed save it were Coriantumr” (Ether 13:21). The warning went unheeded by Coriantumr and his people—since “the Spirit of the Lord had ceased striving with them” (Ether 15:19). The entire Jaredite nation was destroyed, except for Coriantumr himself, who came among the very people—the descendants of the Mulekites in Zarahemla—who, after their eventual union with Mosiah I and his people from the land of Nephi, sometime in the period 279 bc to 130 bc, became heirs of the Promised Land as long as they were righteous.