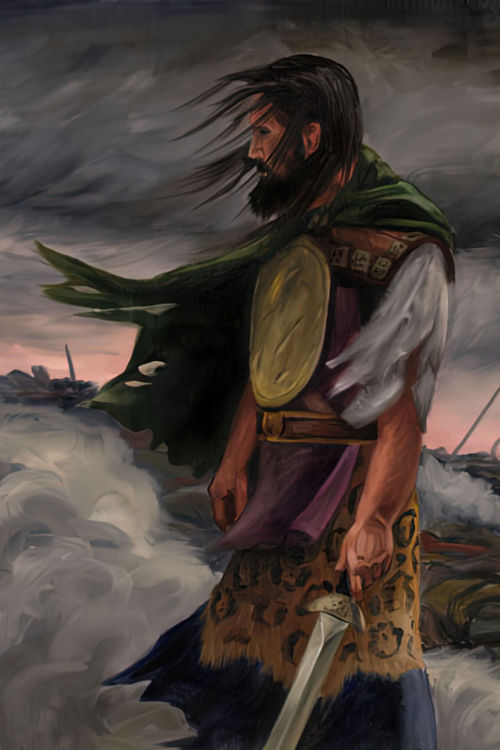 Coriantumr was the last of the Jaredite kings, spanning the time from the Tower of Babel. Coriantumr, “having studied, himself, in all the arts of war and all the cunning of the world” , was at the time occupied with military maneuvers to maintain his power and position in the face of constant attacks from rival factions. The Lord sent Ether to the unrepentant king to declare

that, if he would repent, and all his household, the Lord would give unto him his kingdom and spare the people—Otherwise they should be destroyed, and all his household save it were himself. And he should only live to see the fulfilling of the prophecies which had been spoken concerning another people receiving the land for their inheritance; and Coriantumr should receive a burial by them; and every soul should be destroyed save it were Coriantumr.

The king and his household rejected the message and continued their political intrigues and warfare. Because of their continued disobedience and their contempt for the prophets, “the Lord did visit them in the fulness of his wrath, and their wickedness and abominations had prepared a way for their everlasting destruction”. Millions of Jaredites were slain in a final battle. For a moment, Coriantumr felt remorse. “He began to repent of the evil which he had done; he began to remember the words which had been spoken by the mouth of all the prophets, and he saw them that they were fulfilled thus far, every whit; and his soul mourned and refused to be comforted”. But his penitence was short-lived. The Jaredite nation was destroyed, leaving Coriantumr the sole survivor, except for Ether. “And the Lord spake unto Ether, and said unto him: Go forth. And he went forth, and beheld that the words of the Lord had all been fulfilled; and he finished his record;... and he hid them in a manner that the people of Limhi did find them”.

In accordance with the prophecy made by Ether, Coriantumr came among the very people—the descendants of the Mulekites in Zarahemla—who, after their eventual union with Mosiah I and his people from the land of Nephi sometime in the period 279 BC to 130 BC, would serve as heirs of the Promised Land for as long as they were righteous.