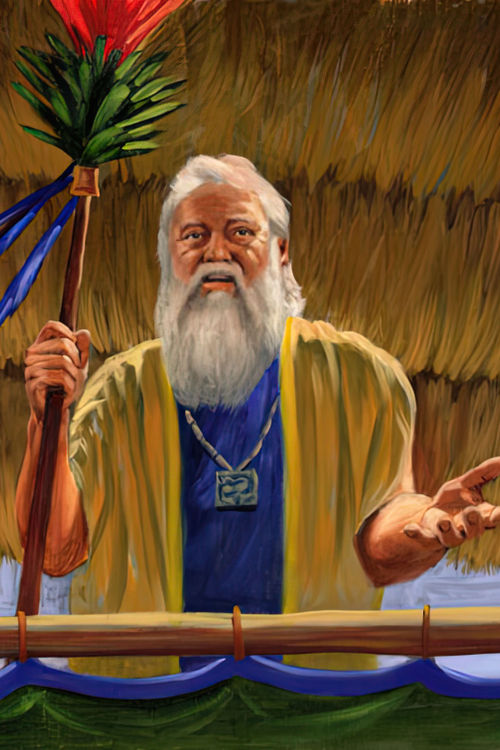 King Benjamin is one of the most beloved and oft-quoted personalities in the Book of Mormon. His valedictory discourse to his people, given about 124 BC, describes a Christ-centered life of service and spiritual integrity. Given through the power of revelation, his discourse is one of the most celebrated gospel sermons ever recorded.

And moreover, I say unto you, that there shall be no other name given nor any other way nor means whereby salvation can come unto the children of men, only in and through the name of Christ, the Lord Omnipotent.

For the natural man is an enemy to God, and has been from the fall of Adam, and will be, forever and ever, unless he yields to the enticings of the Holy Spirit, and putteth off the natural man and becometh a saint through the atonement of Christ the Lord, and becometh as a child, submissive, meek, humble, patient, full of love, willing to submit to all things which the Lord seeth fit to inflict upon him, even as a child doth submit to his father.

And again, believe that ye must repent of your sins and forsake them, and humble yourselves before God; and ask in sincerity of heart that he would forgive you; and now, if you believe all these things see that ye do them.

And now, if God, who has created you, on whom you are dependent for your lives and for all that ye have and are, doth grant unto you whatsoever ye ask that is right, in faith, believing that ye shall receive, O then, how ye ought to impart of the substance that ye have one to another.

And see that all these things are done in wisdom and order; for it is not requisite that a man should run faster than he has strength.

History: Benjamin was the son of the first Mosiah, who was commanded of the Lord to depart from the [land of Nephi with as many as would listen to the Lord, to preserve their lives and the records of their ancestors. Guided by the Lord through the wilderness, they traveled northward to safety in Zarahemla, where they joined the descendants of Mulek—“for the Lord did bring Mulek surviving son of King Zedekiah of Judah] into the land north, and Lehi into the land south”. Mosiah was named king over the union of the two peoples and served in righteousness, conferring the kingdom in his old age upon his son. King Benjamin received custody of the sacred records from Amaleki, and, like his father, served the people with distinction, having established peace in the [land of Zarahemla through outstanding political and military leadership. “And he did fight with the strength of his own arm, with the sword of Laban”.

As a father, and spiritual leader, he taught his three sons—Mosiah, Helorum, and Helaman—the importance of the scriptures. “I say unto you, my sons, were it not for these things, which have been kept and preserved by the hand of God, that we might read and understand of his mysteries, and have his commandments always before our eyes, that even our fathers would have dwindled in unbelief,... O my sons, I would that ye should remember that these sayings are true, and also that these records are true”.

Before his death, Benjamin appointed his son Mosiah to be king of the land. In Benjamin’s farewell address, much of which was revealed to him by a heavenly messenger, he gave his people a new name, the name of Christ. So powerful were the words of King Benjamin that his people experienced a complete spiritual transformation.

And they all cried with one voice, saying: Yea, we believe all the words which thou hast spoken unto us; and also, we know of their surety and truth, because of the Spirit of the Lord Omnipotent, which has wrought a mighty change in us, or in our hearts, that we have no more disposition to do evil, but to do good continually.

And we, ourselves, also, through the infinite goodness of God, and the manifestations of his Spirit, have great views of that which is to come; and were it expedient, we could prophesy of all things.

King Benjamin confirmed the mighty change that had taken place through the Spirit of the Lord.

And now, because of the covenant which ye have made ye shall be called the children of Christ, his sons, and his daughters; for behold, this day he hath spiritually begotten you; for ye say that your hearts are changed through faith on his name; therefore, ye are born of him and have become his sons and his daughters.