Leader of priests of Noah³, tributary monarch under Laman³ 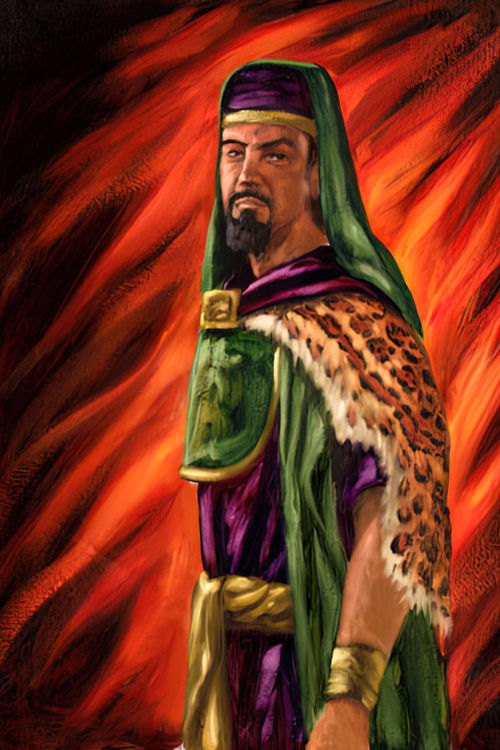 Amulon was the leader of the priests of King Noah from about 150 BC to 121 BC.

Amulon and other priests of Noah joined with the Lamanite forces after having lived in the wilderness following King Noah’s death. In their travels, the Lamanites discovered the settlement of Alma in Helam. Thy promised Alma they would spare the lives of the people and grant them liberty if he showed them the way back to the land of Nephi. Alma complied, but the Lamanites did not keep their promise, instead placing guards all about the land and appointing Amulon as ruler of that land. Amulon “put tasks upon them, and put task-masters over them” to punish Alma.

In their afflictions, Alma and the people cried mightily unto the Lord for help. Amulon took offense at this and threatened death to anyone caught praying. “And Alma and his people did not raise their voices to the Lord their God, but did pour out their hearts to him; and he did know the thoughts of their hearts”.

The Lord answered that He would make their burdens light and would eventually free them. The faith of the people was magnified and “the Lord did strengthen them that they could bear up their burdens with ease, and they did submit cheerfully and with patience to all the will of the Lord”. Eventually, the Lord caused a deep sleep to come over the forces of Amulon so that Alma and his people could escape. After twelve days of travel, Alma and his people reached Zarahemla in safety. As for Amulon, he and his people were appointed by the king of the Lamanites to teach the Nephite language to the Lamanites.