Son of Mosiah², missionary to Lamanites 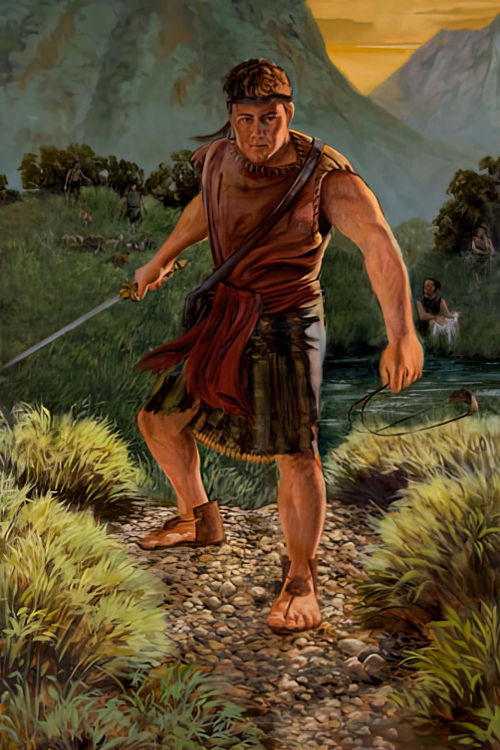 All four of the sons of King Mosiah—Ammon, Aaron, Omner, and Himni—were at first “numbered among the unbelievers” and were “the very vilest of sinners”. An angel intervened and called them to repentance. After that they went about preaching the gospel, confirming their testimony and bringing about much good in their own land and later among the Lamanites.

History: Following their miraculous conversion, Ammon and his brethren desired more than anything else to declare the gospel of Jesus Christ to “every creature.” Thus they decided to embark on a missionary journey among the Lamanites that lasted fourteen years.

Ammon journeyed to the land of Ishmael, where he gained the respect of King Lamoni and his servants when he defended the royal flocks and herds.

Ammon assured the queen that her husband was not dead, “but he sleepeth in God” and would be restored on the morrow. The next day, King Lamoni arose and testified of the coming Messiah and His divine mission. In the events that followed, many were converted to the gospel by the teachings of Ammon and Lamoni. “And thus the work of the Lord did commence among the Lamanites”.

Ammon was then sent by the Lord to free his brethren, who were imprisoned in the land of Middoni. On the way to Middoni, King Lamoni and Ammon encountered Lamoni’s father, king over all the Lamanite territories. He became angry with Ammon and tried to take his life. But Ammon subdued the elder king, who was touched by “the great love he Ammon] had for his son”. In this way, Ammon set the stage for the king’s later conversion through the ministry of Aaron.

Later, Ammon and his brethren assisted the converted Lamanites, who had adopted the name “Anti-Nephi-Lehies” to distinguish themselves from their hard-hearted brethren. The Anti-Nephi-Lehies gathered to a place of protection in the [land of Jershon, east by the sea, south of Bountiful. There they were known by the Nephites as “the people of Ammon”.