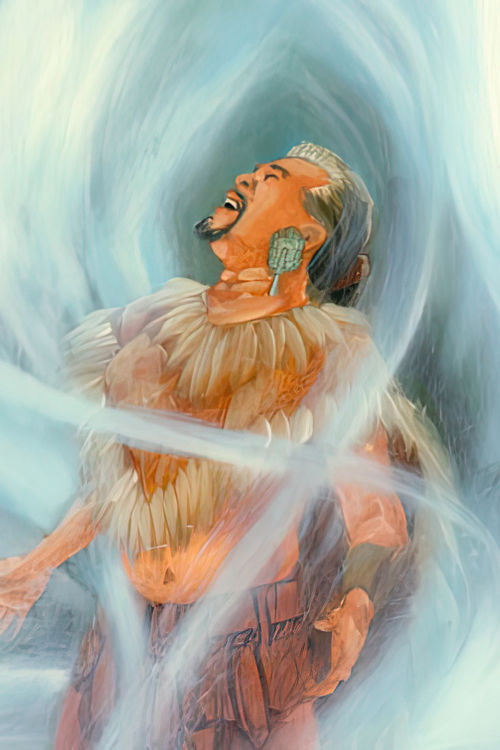 Aminadab was a Nephite dissenter who had gone over to the Lamanite side during the days of Nephi and Lehi, the sons of Helaman. Having taken their ministry to the land southward from Zarahemla, Nephi and Lehi were cast into prison by the Lamanites and sentenced to death. But the Lord caused the two prophets to be encircled about by a protective shield of fire and an impenetrable cloud of darkness. They urged the terrified Lamanites to be calm, assuring them that the manifestations were divine. During the earthquakes, a “still voice of perfect mildness” pierced the captors’ souls with a heavenly call to repentance, which caused them to flee. It was then that Aminadab observed the radiant faces of Nephi and Lehi, seeing that they were looking upward as if conversing with heavenly beings.

Aminadab told the panicked crowd, “They do converse with the angels of God”. The crowd then asked what they should do to be freed of the cloud of darkness. Aminadab responded, “You must repent, and cry unto the voice, even until ye shall have faith in Christ, who was taught unto you by Alma, and Amulek, and Zeezrom; and when ye shall do this, the cloud of darkness shall be removed from overshadowing you”. They immediately obeyed his counsel, and the darkness dispersed so that all present “were filled with that joy which is unspeakable and full of glory”. They were then blessed with the ministration of angels descending from heaven. Because of these blessings, about 300 individuals were converted and became an influence for good, reclaiming “the more part” of the Lamanites in the regions round about.