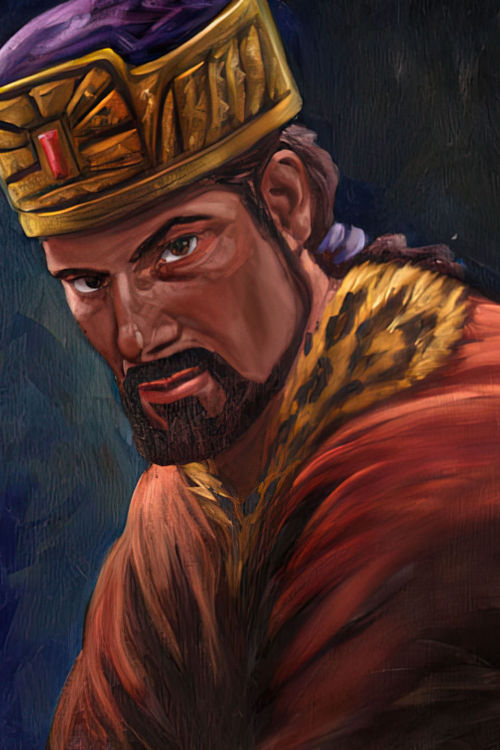 Akish is infamous among the Jaredites for launching a murderous, secret combination to get power and gain. Akish was a friend of Omer, the king who had been deposed and imprisoned by his rebellious son Jared. When Jared’s brothers rose up in support of their father and defeated Jared’s forces, Jared promised to return the kingdom in exchange for his life. His brothers agreed, but Jared’s appetite for power was strong. “And now Jared became exceedingly sorrowful because of the loss of the kingdom, for he had set his heart upon the kingdom and upon the glory of the world”. It was then that Jared’s daughter reminded him of the account of the secret combinations of antiquity contained in “the record which our fathers brought across the great deep”. She concocted a plan to seduce Akish with her dancing so that he would desire her as his wife. At that point she and her father could then induce Akish to join in a secret oath to slay Omer and regain the kingdom. Akish agreed with the plan, and so began a campaign of oaths among his kinsfolk based on the pattern Satan inspired Cain to use. Akish succeeded in taking back the kingdom for Jared. Having been forewarned by the Lord in a dream, Omer escaped with his life and fled to safety with his family. Akish then murdered Jared as he sat on his throne and became embroiled in a long power struggle involving his own rebellious sons—eventually leading to a civil war that destroyed the entire nation, save only thirty souls and those who returned with Omer when he recovered the throne.

Moroni, who abridged the records of the Jaredites contained in the Book of Ether, extracted the moral of the story: “For the Lord worketh not in secret combinations, neither doth he will that man should shed blood, but in all things hath forbidden it, from the beginning of man.... And they have caused the destruction of this people of whom I am now speaking, and also the destruction of the people of Nephi”. Moroni then gave counsel to the nations who receive the message of the Book of Mormon.

And whatsoever nation shall uphold such secret combinations, to get power and gain, until they shall spread over the nation, behold, they shall be destroyed; for the Lord will not suffer that the blood of his saints, which shall be shed by them, shall always cry unto him from the ground for vengeance upon them and yet he avenge them not.

Wherefore, O ye Gentiles, it is wisdom in God that these things should be shown unto you, that thereby ye may repent of your sins, and suffer not that these murderous combinations shall get above you, which are built up to get power and gain—and the work, yea, even the work of destruction come upon you, yea, even the sword of the justice of the Eternal God shall fall upon you, to your overthrow and destruction if ye shall suffer these things to be....

Wherefore, I, Moroni, am commanded to write these things that evil may be done away, and that the time may come that Satan may have no power upon the hearts of the children of men, but that they may be persuaded to do good continually, that they may come unto the fountain of all righteousness and be saved.