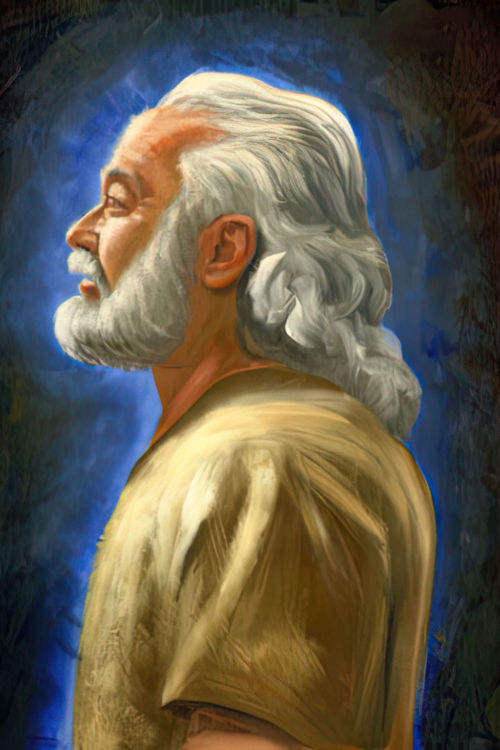 Abinadi is an enduring symbol of righteousness over worldly pomp and evil. Before the court of wicked King Noah, he fulfilled with boldness the commission of crying repentance to the debauched leadership of the Nephite colony established earlier by the expedition of Zeniff into Lamanite territory. Abinadi delivered his message with courage and inspiration, then sealed his testimony as a martyr in the flames of retribution. Abinadi is a type and shadow of the Redeemer. Like Christ, he did not shrink from the charge to stand firm against evil and to carry out the will of the Father in giving his life for the cause of spiritual liberty.

History: King Noah was the son of the colonizer Zeniff, who led an expeditionary force south from Zarahemla around 200 BC into the land of Lehi-Nephi, the region originally settled by Lehi and his family. The colony subsisted for decades amidst an uneasy and sometimes violent relationship with the Lamanites. Finally, Zeniff, in his old age, conferred the kingdom upon his son Noah, around 160 BC. Noah did not honor the covenants with the Lord and instead developed a corrupt government. When, around 150 BC, the Lord sent Abinadi to preach repentance and warn the people against the inevitable destructive outcomes of their behavior, the prophet’s compelling words were rejected and he was forced to flee. Two years later, however, he returned in disguise to convey the dire pronouncement of the Lord. “And it shall come to pass that except they repent I will utterly destroy them from off the face of the earth”.

Abinadi was bound and brought before the court of the king, where one of the priests attempted to cross the prophet with a question about the meaning of the scripture, “How beautiful upon the mountains are the feet of him that bringeth good tidings; that publisheth peace; that bringeth good tidings of good; that publisheth salvation; that saith unto Zion, Thy God reigneth”. In this misguided effort to contrast the biblical prophecy about peace and good news with Abinadi’s divinely commissioned invective against sin, the priest revealed his ignorance of scripture and his serious misjudgment about the power behind Abinadi’s mission as a servant of the Almighty. In response, Abinadi, under the influence of the Spirit and with prophecies anchored in the word of God, overpowered his audience to such an extent that his enemies did not dare lay their hands upon him, “for the Spirit of the Lord was upon him; and his face shone with exceeding luster, even as Moses’ did while in the mount of Sinai, while speaking with the Lord”.

Abinadi reprimanded the court for its failure to teach and exemplify the Ten Commandments and uphold the law of Moses, and he emphatically declared the coming atonement of Christ as the ordained fulfillment of the law. “For behold, did not Moses prophesy unto them concerning the coming of the Messiah, and that God should redeem his people? Yea, and even all the prophets who have prophesied ever since the world began—have they not spoken more or less concerning these things?”.

Then Abinadi explained the nature and relationship of the Father and the Son in connection with the divine mission of atonement and provided the correct interpretation of the Isaiah scripture invoked earlier by the wicked priest. Who are to become the heirs of the kingdom of God and the seed of Christ? Who are to publish peace upon the mountains?

Behold I say unto you, that whosoever has heard the words of the prophets, yea, all the holy prophets who have prophesied concerning the coming of the Lord—I say unto you, that all those who have hearkened unto their words, and believed that the Lord would redeem his people, and have looked forward to that day for a remission of their sins, I say unto you, that these are his seed, or they are the heirs of the kingdom of God....

Unable to withstand the damning truth washing over them, the priests persuaded the king to take action against Abinadi. Noah sentenced Abinadi to be executed unless he agreed to withdraw his words. But he stood firm. “Yea, and I will suffer even until death, and I will not recall my words, and they shall stand as a testimony against you. And if ye slay me ye will shed innocent blood, and this shall also stand as a testimony against you at the last day”. As a result, Abinadi was subjected to death by flames. Before he died, he declared, “Behold, even as ye have done unto me, so shall it come to pass that thy seed shall cause that many shall suffer the pains that I do suffer, even the pains of death by fire; and this because they believe in the salvation of the Lord their God”. His words were indeed fulfilled when, later, King Noah was burned to death by his own subjects. Thus Abinadi’s pronouncements came to pass.