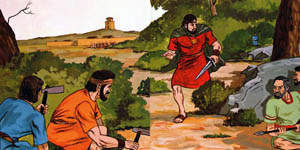 One day, the Lamanites unexpectedly draw near to the city, ready for battle. Limhi is warned, and he prepares. A bloody battle ensues. Limhi’s people capture the Lamanite King, who explains that the attack is revenge for kidnapping their daughters, who were (unbenkows to the Lamanites) actually kidnapped by Amulon's people. Having cleared the misunderstanding, The king, along with Limhi, are successful in pacifying the army, and ending the battle.