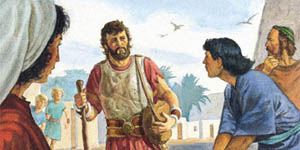 Coriantumr, a warrior in the last generation of Jaredites fights against rivals forces, the last of which is led by Shiz. Thier two colossal armies march towards each other, initiate a battle, and fight all day long. After a gruesome war, Coriantumr is the last man standing.

Sometime after the battle, Coriantumr wanders around, and somehow stumbles upon the Mulekites, or “people of Zarahemla” who had recently arrived from Jerusalem. He spends some time with them, and then leaves, never to be heard from again.