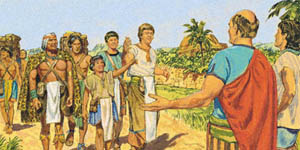 Ammon and the missionaries have a sizable group of converts  who want to immigrate to Zarahemla to escape persecution, so the chief judge holds a referendum to get the Nephite public opinion as to what should be done with them. The public states that the eastern city of Jershon will be designated for the converts, and agrees to provide military protection for them, since the converts had covenanted not to fight anymore.

Ammon brings Alma to his converts, who are camping out in the wilderness—Ammon tells them they are welcome to inhabit the city of Jershon.