Revolt, Attack, and Conversion (81 BC) 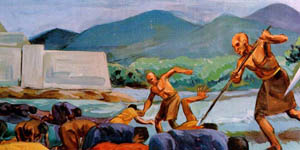 The unconverted Lamanites begin a coup against the converted king and his subjects. The converts, having made an oath not to fight, helplessly fall to the ground and are massacred by the insurgents.

Many insurgent soldiers, upon seeing the how the believers sacrifice themselves unresisted, are deeply moved, and cease the strike. Guilt–ridden by their merciless acts of war, the soldiers repent, and decide to join the converts.

Over a thousand soldiers follow suit, and the number of soldier converts exceeds the number of casualties. The most hardened warriors were the Amalekites and the Amulonites (Nephite dissenters) who do not join the converts.