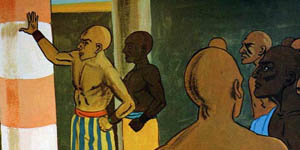 At some point a group referred to as Amalekites defects from the Nephites and joins the Lamanites.  Their influence is felt among the Lamanites, and they (along with the Amulonites) become more hard-hearted and stubborn than the native Lamanites.

It is plausible that the Amalekites and the Amlicites are the same group of people, and that the spelling of their name was never standardized.