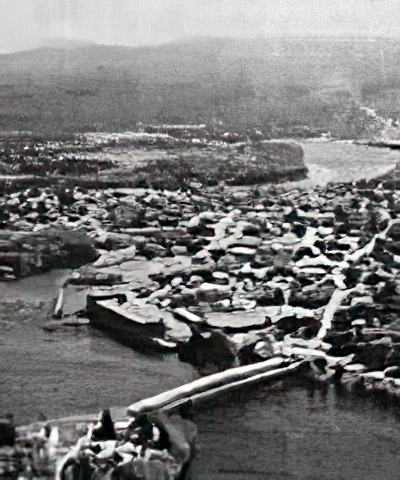 A town on the Northeast boundary of the territory of Benjamin, given to the Levites. It stood on the northern frontier of the kingdom of Judah, Geba and Beersheba marking respectively the northern and southern limits. In 2 Samuel 5:25 “Geba” should be altered to “Gibeon,” which stands in the corresponding passage, 1 Chronicles 14:16. In Judges 20:10,33; 1 Samuel 13:3,16, the Hebrew reads “Geba,” the translation “Gibeah” being due to confusion of the two names. From 1 Samuel 14:5 we gather that Geba stood to the South of the great gorge, Wady Suweinit, commanding the pass at Michmash.

This was the scene of Jonathan’s daring enterprise against the Philistines, when, accompanied by his armor-bearer, he accomplished an apparently impossible feat, climbing the rocky steeps of the gorge to the North and putting the enemy to flight. There can be no doubt that the modern village of Jeba` occupies the ancient site. It stands to the South of Wady Suweinit, looking toward Michmash—modern Mukhmas—with Seneh, the crag on the southern lip of the gorge, in front of it. The distance from Jerusalem is about 6 miles. It was fortified by Asa with materials that his enemy Baasha had used to fortify Ramah against him. It is named by Isaiah in his description of the terrifying march of the Assyrians upon Jerusalem from the North.

It appears among the cities which were reoccupied by Israel after the Exile.