The History of Illinois 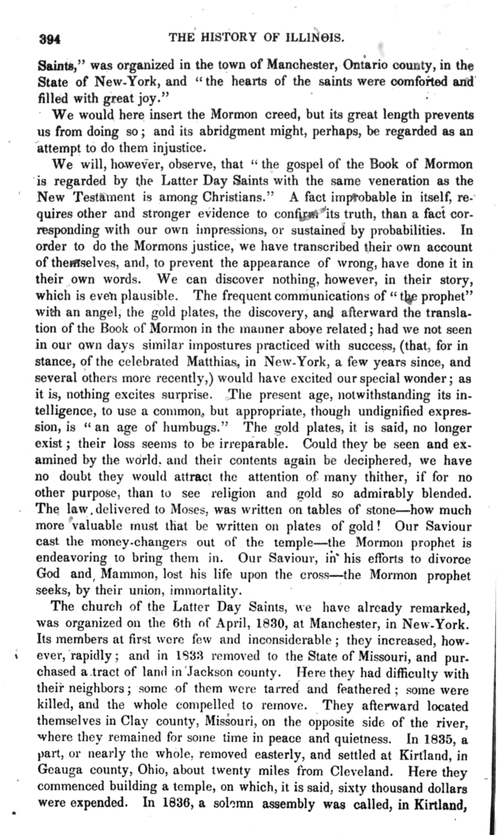 Brown, Henry. The History of Illinois, from its first discovery and settlement, to the present time, 394. New York: J. Winchester, New World Press, 1844.

We will, however, observe, that “the gospel of the Book of Mormon is regarded by the Latter Day Saints with the same veneration as the New Testament is among Christians.” A fact improbable in itself, requires other and stronger evidence to confirm its truth, than a fact corresponding with our own impressions, or sustained by probabilities. In order to do the Mormons justice, we have transcribed their own account of themselves, and, to prevent the appearance of wrong, have done it in their own words.

We can discover nothing, however, in their story, which is even plausible. The frequent communications of “ the prophet” with an angel, the gold plates, the discovery, and afterward the translation of the Book of Mormon in the manner above related; had we not seen in our own days similar impostures practiced with success, (that, for instance, of the celebrated Matthias, in New-York, a few years since, and several others more recently,) would have excited our special wonder; as it is, nothing excites surprise. The present age, notwithstanding its intelligence, to use a common, but appropriate, though undignified expression, is “an age of humbugs.” The gold plates, it is said, no longer exist; their loss seems to be irreparable. Could they be seen and examined by the world, and their contents again be deciphered, we have no doubt they would attract the attention of many thither, if for no other purpose, than to see religion and gold so admirably blended. The law delivered to Moses, was written on tables of stone—how much more valuable must that be written on plates of gold! Our Saviour cast the money-changers out of the temple—the Mormon prophet is endeavoring to bring them in. Our Saviour, in his efforts to divorce God and Mammon, lost his life upon the cross—the Mormon prophet seeks, by their union, immortality.