Religion in the United States of America 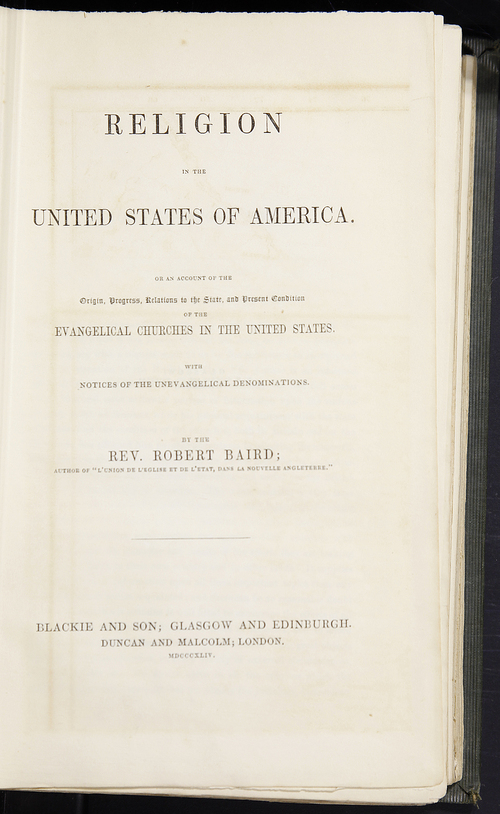 The Mormons. The annals of modern times furnish few more remarkable examples of cunning in the leaders, and delusion in their dupes, than is presented by what is called Mormonism. An ignorant but ambitious person of the name of Joseph Smith, jun., residing in the west of the State of New York, pretends that an angel appeared to him in 1827, and told him where he would find a stone box, containing certain golden plates, with a revelation from heaven inscribed on them. Four years after this, the plates having of course been found as described, the impostor set about the writing out of this revelation, and pretended, with the aid of a pair of stone spectacles found also in the box, to read it off to a man of the name of Harris, and afterwards to one called Cowdery, these acting as his amanuenses. The “prophet,” as he is now called, took care, of course, that neither of them, nor any one else, should see the plates, the part of the room he occupied having been partitioned off from where they sat by a blanket. After three years spent in concocting this new revelation, the book at last was completed, and published as a 12mo volume of 588 pages at Palmyra, in the State of New York. It is commonly called the Mormon’s Bible, but more properly The Book of Mormon, and is divided into fifteen books or parts, each purporting to be written by the author whose name it bears. These profess to give the history of about a thousand years from the time of Zedekiah, king of Judah to [647] A.D. 420. The whole work professes to be an abridgment by one Moroni, the last of the Nephites, of the seed of Israel, from the records of his people. Not to trouble the reader with details respecting this absurdest of all pretended revelations from heaven, we need only say that it undertakes “to trace the history of the aborigines of the American continent, in all their apostacies, pilgrimages, trials, adventures, and wars, from the time of their leaving Jerusalem, in the reign of Zedekiah, under one Lehi, down to their final disaster, near the hill Camorah, in the State of New York, where Smith found his golden plates, and in that final contest, according to the prophet Moroni, about 230,000 were slain in battle, and he alone escaped to tell the tale.”1

But the Book of Mormon, which they do not consider so much in the light of a substitute for the holy scriptures, as of a supplement to them, does not contain all Joseph Smith’s revelations; a 12mo volume of about 250 pages, called the Book of Covenants and Revelations, and filled with the silliest things imaginable, of all sorts, has been added to it by way of supplement. Thoroughly to comprehend the whole system, however, one must read Mr. Parley P. Pratt’s “Voice of Warning,” for he is an oracle among the Mormons, and also the newspaper which they publish as an organ for the dissemination of their doctrines. We may add, that aided by his wonderful spectacles, Smith is making a new translation of the Bible, although quite unacquainted with Hebrew and Greek!

The publication of his own Bible in 1830, may be considered as the starting point of the sect. For some years he made but few converts; but having removed to Kirtland in Ohio he was there joined by Sidney Rigdon, formerly a heterodox Baptist preacher, who had been preparing the way for Mormonism by propagating certain doctrines of his own, 1 Turner’s “Mormonism in all Ages,” published at New York, and to be had at Wiley and Putnam, booksellers, London. and being a much better informed man than Smith, it is chiefly under his plastic hand that the religious economy of the sect has been formed. From Ohio they began to remove, in 1834, to Jackson county, in Missouri, where they were to have their “mount Zion,” the capital and centre of their great empire. The people of Mis [648]souri, a few years after, compelled them to leave it, upon which they went to Illinois, and there they are now building the city of Nauvoo, on the left bank of the Mississippi, and have been flocking to the spot ever since, until their numbers amounted to 10,000. Smith and Rigdon are still their chief prophets. For a while they had many to sympathise with them on account of the severity with which they had been supposed to be treated in Missouri; but so much has lately come to light in proof of the inordinate ambition, and vile character and conduct of their leaders, who want to found a kind of empire in the West, that their speedy annihilation as a sect seems now inevitable. One dupe after another is leaving them, and exposing the abominations of the fraternity and its chiefs. Smith and some others seem now marked out as objects on which the laws of the land must soon inflict summary justice. Their leaders are evidently atrocious impostors, who have deceived a great many weak-minded but well-meaning persons, by holding out to them promises of great temporal advantage. “Joe Smith,” as he is commonly called, will soon find that America is not another Arabia, nor he another Mahomet; his hope of founding a vast empire in the western hemisphere must soon vanish.

To conclude, the Mormons are a body of ignorant dupes, collected from almost all parts of the United States, and also from the British islands. A full exposition of the wickedness of their leaders has lately been made by a John C. Bennet, formerly a major-general in the “Legion of Nauvoo,” and an important man among them.