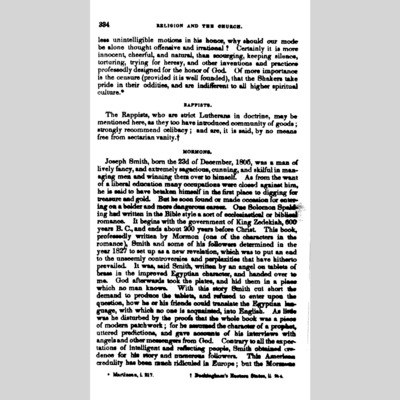 Joseph Smith, born the 23d of December, 1805, was a man of lively fancy, and extremely sagacious, cunning, and skilful in managing men and winning them over to himself. As from the want of a liberal education many occupations were closed against him, he is said to have betaken himself in the first place to digging for treasure and gold.

But he soon found or made occasion for entering on a bolder and more dangerous career.

One Solomon Spalding had written in the Bible style a sort of ecclesiastical or biblical romance. It begins with the government of King Zedekiah, 600 years B. C., and ends about 200 years before Christ. This book, professedly written by Mormon (one of the characters in the romance), Smith and some of his followers determined in the year 1827 to set up as a new revelation, which was to put an end to the unseemly controversies and perplexities that have hitherto prevailed. It was, said Smith, written by an angel on tablets of brass in the improved Egyptian character, and handed over to me. God afterwards took the plates, and hid them in a place which no man knows. With this story Smith cut short the demand to produce the tablets, and refused to enter upon the question, how he or his friends could translate the Egyptian language, with which no one is acquainted, into English. As little was he disturbed by the proofs that the whole book was a piece of modern patchwork; for he assumed the character of a prophet, uttered predictions, and gave accounts of his interviews with angels and other messengers from God. Contrary to all the expectations of intelligent and reflecting people, Smith obtained credence for his story and numerous followers. This American credulity has been much ridiculed in Europe; but the Mormons [334] might well reply: If God in one place works miracles by means of ancient relics, may he not in another raise up new prophets?

Most of the Mormons went to the state of Mississippi, and conducted themselves at first with great diligence and sobriety; but their religious opinions soon furnished grounds or at least pretexts for numerous complaints. Their opponents proposed to purchase all the real estate of the Mormons at a fair valuation and at a large advance on the cost, provided the latter would quit the country. Hereupon the Mormons made them the same proposal, and declared that according to the predictions of their prophet, the whole land was assigned and given to them by God. As quarrels, complaints, and acts of violence ensued, the governor, Daniel Dunklin, declared in writing: “We can hinder no one from settling in this state wherever he pleases, provided the property and rights of others be not injured in consequence. Every one is entitled to absolute freedom in matters of religion; and the Mormons if they choose may reverence Joe Smith as a man, as an angel, or even as the living God; and may call their place Zion, the Holy Land, or Heaven. Nothing is so absurd and ridiculous that they may not adopt it as a religious belief, so long as they leave the rights of others undisturbed.”∗

But unfortunately the religious aversion increased on both sides, and political motives came in to swell the excitement. In fact the entire views of the Mormons were in glaring opposition to the republican democratic institutions of the country. The prophet guided the whole as a church-potentate, and controlled all the votes; so that there was reason to fear, that the government of the state would fall entirely into his hands. He

∗ Hunt’s Mormon War, p.139. declared, that all history taught with a voice of thunder, that man was not capable of self-government, of making laws for himself, of protecting himself, and of advancing his own welfare and that of the world.

The regular authorities could neither prevent nor punish individual acts of violence; and when a civil war was thus gradually brought about, it appeared that no dependence could be placed on the militia who were called out to restore order. The Mormons set Smith’s prophecies above the laws of the land; and their opponents, the will of the sovereign people above the commands of the magistrates. This will had in view the entire expulsion of the Mormons; and as the latter were finally compelled to submit and to emigrate to Illinois, the numerous criminal prosecutions fell to the ground. Each party was to blame, and had to make amends to the other; and when peace was brought about after this open war, the whole apparatus of plaintiffs, witnesses, [335] and judges, which seemed designed for ordinary circumstances only, disappeared.

In Illinois the number and the wealth of the Mormons increased; but there soon occurred the same petty jealousies, complaints, and accusations as in Missouri. In addition to this, the Mormons fell out with one another; and Joe Smith, contrary to the American laws, interdicted a newspaper that was opposed to him, and had the press destroyed. As the governor of Illinois pledged himself for his safety, Smith submitted to imprisonment, and a legal punishment no doubt awaited him. This seemed to his enemies far too slight for an impostor, a false prophet, an instigator to war, and one suspected of favoring a murderous attack on the governor of Missouri. Disguised persons forced their way into the prison, and shot Joe Smith and his brother. The Mormons kept themselves quiet, in hopes of strict justice at the hands of the law, or in the consciousness of their weakness; but they have not changed the course of their old enemies, much less won them over to their side.