History of All Christian Sects and Denominations 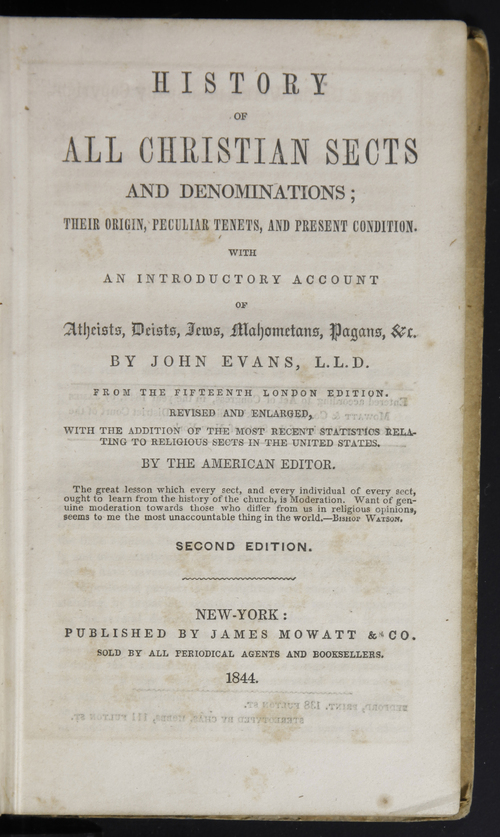 ALL CHRISTIAN SECTS AND DENOMINATIONS;

FROM THE FIFTEENTH LONDON EDITION.

WITH THE ADDITION OF THE MOST RECENT STATISTICS

RELATING TO RELIGIOUS SECTS IN THE UNITED STATES.

BY THE AMERICAN EDITOR.

The great lesson which every sect, and every individual of every sect, ought to learn from the history of the church, is Moderation. Want of genuine moderation towards those who differ from us in religious opinions, seems to me the most unaccountable thing in the world.—BISHOP WATSON.

SOLD BY ALL PERIODICAL AGENTS AND BOOKSELLERS.

MORMONITES, OR LATTER-DAY SAINTS The Book of Mormon, which may be said to be at the foundation of Mormonism, was first published in the year [232] 1830. Since that period, its believers and advocates have zealously propagated its doctrines. Through every state in the Union, and in Canada, they have disseminated its principles. They have crossed the ocean, and, in England, if their own accounts may be credited, have made thousands of converts; and recently some of their missionaries have even been sent to Palestine.

The Book of Mormon purports to be the record, or history, of a certain people, who inhabited America previous to its discovery by Columbus. This people, according to it, were the descendants of one Lehi, who crossed the ocean, from the eastern continent, to this. Their history and records, containing prophecies and revelations, were engraven, by the command of God, on small plates, and deposited in the hill Comora, which appears to be situated in Western New York. Thus was preserved an account of this race, (together with their religious creed,) up to the period when the descendants of Laman, Lemuel and Sam, who were the three eldest sons of Lehi, arose and destroyed the descendants of Nephi, who was the youngest son. From this period, the descendants of the eldest sons ‘dwindled in unbelief,’ and ‘became a dark, loathsome and filthy people.’

The last mentioned are our present Indians.

The plates above mentioned remained in their depository until about the year 1825, when, as the Mormons say, they were found by Joseph Smith, Jr., who was directed in the discovery by the Angel of the Lord. On these plates were certain hieroglyphics, said to be of the Egyptian character, which Smith, by the direction of God, being instructed by inspiration as to their meaning, proceeded to translate. The following is Smith’s own account of the mode in which these plates came into his possession. It is contained in a letter dated March 1, 1842: