Commerce of the Prairies 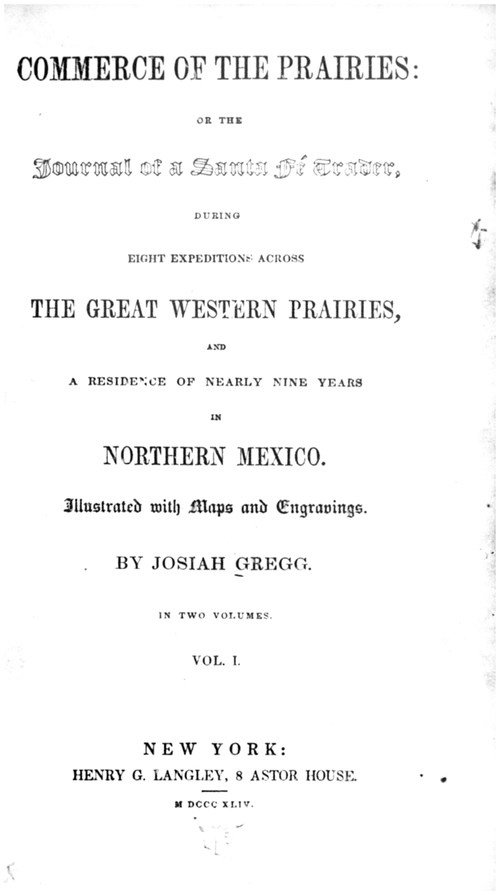 Gregg, Josiah. Commerce of the Prairies: or the Journal of a Santa Fé Trader, during Eight Expeditions across The Great Western Prairies, and a Residence of Nearly Nine Years in Northern Mexico, vol. 1, 312–20. New York: Langley & Astor, 1844.

COMMERCE OF THE PRAIRIES OR THE Journal of a Santa Fé Trader, DURING EIGHT EXPEDITIONS ACROSS THE GREAT WESTERN PRAIRIES,

A RESIDENCE OF NEARLY NINE YEARS IN

BY JOSIAH GREGG IN TWO VOLUMES VOL. I.

M DCCC XLIV On the 11th of May we arrived at Independence, after a propitious journey of only thirty-eight days.* We found the town in a thriving condition, although it had come very near being laid

596 waste a few years before by the Mormons, who had originally selected this section of the country for the site of their New Jerusalem. In this they certainly displayed far more taste and good sense than they are generally supposed to be endowed [313] with: for the rich and beautiful uplands in the vicinity of Independence might well be denominated the ‘garden spot’ of the Far West. Their principal motive for preferring the border country, however, was no doubt a desire to be in the immediate vicinity of the Indians, as the reclamation of the ‘Lost tribes of Israel’ was a part of their pretended mission.

Prior to 1833, the Mormons, who were then flocking in great swarms to this favored region, had made considerable purchases of lots and tracts of land both in the town of Independence and in the adjacent country. A general depot, profanely styled the ‘Lord’s Store,’ was established, from which the faithful were supplied with merchandise at moderate prices; while those who possessed any surplus of property were expected to deposit it in the same, for the benefit of the mass. The Mormons were at first kindly received by the good people of the country, who looked upon them as a set of harmless fanatics, very susceptible of being moulded into good and honest citizens. This confidence, however, was not destined to remain long in the ascendant, for they soon began to find that the corn in their cribs was sinking like snow before the sun-rays, and that their hogs and their cattle were by some mysterious agency rapidly disappearing. The new-comers also drew upon themselves much animadversion in consequence of the immorality of their lives, and in particular their disregard for the sacred rites of marriage.

Still they continued to spread and multiply, not by conversion but by immigration, to an alarming extent; and in proportion as they grew strong in numbers, they also became more exacting and bold in their pretensions. In a little paper printed at Independence under their Turkey Cr.

Arkansas, immediate auspices, everything was said that could provoke hostility between the ‘saints’ and their ‘worldly’ neighbors, until at last they became so emboldened by impunity, as openly to boast of their determination to be the sole proprietors of the ‘Land of Zion;’ a revelation to that effect having been made to their prophet.

The people now began to perceive, that, at the rate the intruders were increasing, they would soon be able to command a majority of the county, and consequently the entire control of affairs would fall into their hands. It was evident, then, that one of the two parties would in the course of time have to abandon the country; for the old settlers could not think of bringing up their families in the midst of such a corrupt state of society as the Mormons were establishing.

Still the nuisance was endured very patiently, and without any attempt at retaliation, until the ‘saints’ actually threatened to eject their opponents by main force. This last stroke of impudence at once roused the latent spirit of the honest backwoodsmen, some of whom were of the pioneer settlers of Missouri, and had become familiar with danger in their terrific wars with the savages.

They were therefore by no [315] means appropriate subjects for yielding what they believed to be their rights. Meetings were held for the purpose of devising means of redress, which only tended to increase the insolence of the Mormons. Finally a mob was collected, which proceeded at once to raze the obnoxious printing establishment to the ground, and to destroy all the materials they could lay hands upon. One or two of the Mormon leaders who fell into the hands of the people, were treated to a clean suit of ‘tar and feathers,’ and otherwise severely punished.

The ‘Prophet Joseph,’ however, was not then in the neighborhood. Having observed the storm-clouds gathering apace in the frontier horizon, he very wisely remained in Ohio, whence he issued his flaming mandates.

These occurrences took place in the month of October, 1833, and I reached Independence from Santa Fé while the excitement was raging at its highest. The Mormons had rallied some ten miles west of the town, where their strongest settlements were located. A hostile encounter was hourly expected: nay, a skirmish actually took place shortly after, in which a respectable lawyer of Independence, who had been an active agent against the Mormons, was killed. In short, the whole country was in a state of dreadful fermentation.

Early on the morning after the skirmish just referred to, a report reached Independence that the Mormons were marching in a [316] body towards the town, with the intention of sacking and burning it. I had often heard the cry of “Indians!” announcing the approach of hostile savages, but I do not remember ever to have witnessed so much consternation as prevailed at Independence on this memorable occasion. The note of alarm was sounded far and near, and armed men, eager for the fray, were rushing in from every quarter. Officers were summarily selected without deference to rank or station: the ‘spirit-stirring drum’ and the ‘ear-piercing fife’ made the air resound with music, and a little army of as brave and resolute a set of fellows as ever trod a field of battle, was, in a very short time, paraded through the streets. After a few preliminary exercises, they started for a certain point on the road where they intended to await the approach of the Mormons. The latter very soon made their appearance, but, surprised at meeting with so formidable a reception, they never even attempted to pull a trigger, but at once surrendered at discretion. They were immediately disarmed, and subsequently released upon condition of their leaving the country without delay.

It was very soon after this affair that the much talked of phenomenon of the meteoric shower (on the night of November 12th) occurred. This extraordinary visitation did not fail to produce its effects upon the superstitious minds of a few ignorant people, who began to wonder whether, after all, the Mor- [317] mons might not be in the right; and whether this was not a sign sent from heaven as a remonstrance for the injustice they had been guilty of towards that chosen sect.* Sometime afterward, a terrible misfortune occurred which was in no way calculated to allay the superstitious fears of the ignorant. As some eight or ten citizens were returning with the ferry-boat which had crossed the last Mormons over the Missouri river, into Clay county, the district selected for their new home, the craft filled with water and sunk in the middle of the current; by which accident three of four men were drowned! It was owing perhaps to the craziness of the boat, yet some persons suspected the Mormons of having scuttled it by secretly boring auger-holes in the bottom just before they had left it.

After sojourning a few months in Clay county, to the serious annoyance of the inhabitants (though, in fact, they had been kindly received at first), the persecuted ‘Latter day Saints’ were again compelled to shift their quarters further off. They now sought to establish themselves in the new county of Caldwell, and founded their town of Far West, where they lingered in comparative peace for a few years. As the county began to fill up with settlers, however, quarrels re- [318] peatedly broke out, until at last, in 1838, they found themselves again at open war with their neighbors. They appear to have set the laws of the state at defiance, and to have acted so turbulently throughout, that Governor Boggs deemed it necessary to order out a large force of state militia to subject them: which was easily accomplished without bloodshed. From that time the Mormons have harbored a mortal enmity towards the Governor: and the attempt which afterwards made to assassinate him at Independence, is generally believed to have been instigated, if not absolutely perpetrated, by that deluded sect.

Being once more forced to emigrate, they passed into Illinois, where they founded the famous ‘City of Nauvoo.’ It would seem that their reception from the people of this state was even more strongly marked with kindness and indulgence than it had been elsewhere, being generally looked upon as the victims of persecution on account of their religious belief; yet it appears that the good people of Illinois have since become about as tired of them as were any of their former neighbors. It seems very clear then, that fanatical delusion is not the only sin which stamps the conduct of these people with so much obliquity, or they would certainly have found permanent friends somewhere; whereas it is well known that a general aversion has prevailed against them wherever they have sojourned.

Before concluding this chapter, it may be [319] proper to remark, that the Mormons have invariably refused to sell any of the property they had acquired in Missouri, but have on the contrary expressed a firm determination to reconquer their lost purchases. Of these, a large lot, situated on an elevated point at Independence, known as the ‘Temple Lot,’ upon which the

‘Temple of Zion’ was to have been raised,—has lately been ‘profaned,’ by cultivation, having been converted into a cornfield! [320]

* In Northern Mexico, as I learned afterwards, the credulity of the superstitious was stil more severely tried by this celestial phenomenon. Their church had been deprived of some important privileges by the Congress but a short time before, and the people could not be persuaded but that the meteoric shower was intended as a curse upon the nation in consequence of that sacrilegious act.