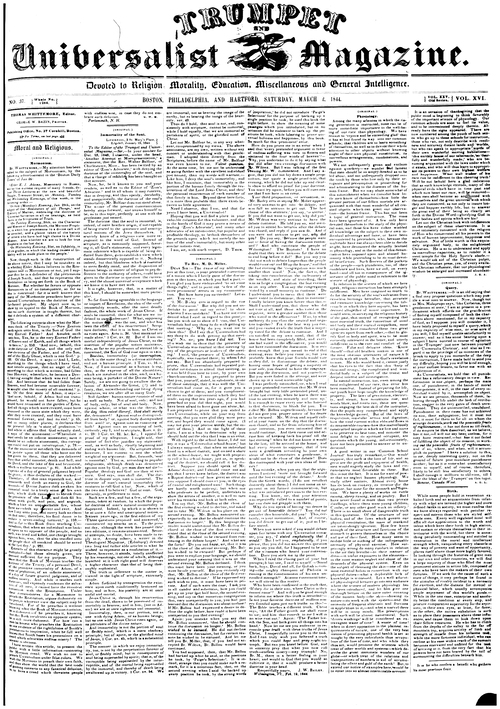 Br. WHITTEMORE,—My attention has been called to the subject of Mormonism, by the following advertisement in the ‘Boston Daily Times’ of Jan 26:

‘Elder E. J. Adams, Missionary to Russia, will by the earnest request of many friends, deliver Three Lectures at the new and beautiful Temple, Tremont Street, on Monday, Tuesday and Wednesday Evenings, of this week, in the following order:—

‘On this (Monday) Evening, Jan. 29th, on the subject of the ‘Restitution of all Things,’ and Eternity of Matter, embracing the doctrine of Universal Salvation in all its bearings, as held forth in the Scriptures of Truth.

‘On Tuesday Evening, 30th, on the Character and Mission of Joseph Smith, the Mormon Prophet, in which his pretensions to a divine call will be unveiled, and a glance taken of the history of others who have laid high claims to a Divine Mission. Also whether we are to look for true Prophets in the last days.

‘On Wednesday Evening, 31st, on Infidelity, in all its grades, in which the leading causes of Infidelity will be made plain to the people.’

Now, though such is the construction of the above notice, that I may be mistaken as to whether Elder Adams believes in the Restitution and in Mormonism or not, yet I suppose that he is a defender of the pretensions of Joseph Smith, and that he represents the Restitution as being set forth in the Book of Mormon. But whether he favors or opposes Mormonism is of no consequence, so far as this is concerned: for it is well known that many of the Mormonite preachers have proclaimed Universalism as the doctrine of the far-famed prophet. My object now is, to show by an appeal to the Book of Mormon, that no such doctrine is taught therein, but that it defends a system of a different character.

The following extracts show what the Mormons think of the Trinity:—‘New Zeerom saith again unto him, is the Son of God the very Eternal Father? And Amulek saith unto him, Yea, he is the very Eternal Father of Heaven and of Earth, and all things which in them is.’ p. 253. ‘And now, behold, this is the doctrine of Christ, and the only and true doctrine of the Father, and of the Son, and of the Holy Ghost, which is one God.’ p. 120. Of the Devil, it says:—‘And I, Lehi, according to the things which I have read, must needs suppose, than an angel of God, according to that which is written, had fallen from Heaven; wherefore, he became a Devil, having sought that which was evil before God. And because that he had fallen from Heaven, and had become miserable forever; he sought also the misery of all mankind.’ p. 64. Of the first state of Adam, it says: —‘And now, behold, if Adam had not transgressed, he would not have fallen; but he would have remained in the garden of Eden. And all things which were created, must have remained in the same state which they were, after they were created; and they must have remained forever, and had no end.’ p. 65; and in many other places, it declares that the present life is ‘a state of probation.’—And while it affirms that God actually died, it says of the atonement:—‘Wherefore it must needs be an infinite atonement; this corruption could not put on incorruption.’ p. 79.—‘For the atonement satisfieth the demands of his justice upon all those who have not the law given to them, that they are delivered from that awful monster, death and hell, and the Devil, and the lake of fire and brimstone, which is endless torment.’ p. 81. And while it speaks of a day of general judgment beyond the grave, it thus declares of the wicked:—‘Therefore, if that man repenteth not, and remaineth and dieth an enemy to God, the demands of Divine Justice doth awaken his immortal soul to a lively sense of his own guilt, which doth cause him to shrink from the presence of the Lord, and doth fill his breast with guilt, and pain, and anguish, which is like an unquenchable fire, whose flame ascendeth up forever and ever. And now I say unto you, that mercy hath no claim on that man; therefore, his final doom is to endure a never-ending torment.’ p. 159.—And so far is this Book from teaching Universalism, that when an individual was looked upon as an opposer of the people, and as such, was tried and killed, one charge brought against him, was, that ‘he also testified unto the people that all mankind should be saved at the last day.’ p. 221.

Extracts of this character might be greatly multiplied—but those already given, are deemed sufficient for my purpose. They show that the Book of Mormon teaches the doctrine of the Trinity, of a personal Devil, of the primitive immortality of Adam, of a state of probation, of an infinite atonement, of a day of future general judgment, and of endless misery. And while it teaches such doctrines, and expressly condemns the salvation of all men, it cannot have the remotest connection with the Restitution. Under these circumstances, for a Mormonite to preach the Restitution, argues dishonesty on his part, in whatever view the subject may be considered. For if he preaches it without knowing what the Book of Mormon contains, he is dishonest—if he preaches it, knowing that this Book inculcates an opposite system, he is still more dishonest. For how can a man be honest who preaches the Restitution as one evidence of the rightfulness of Smith’s pretensions to inspiration, when he full well knows what Smith bases his pretensions on a creed which advocates endless misery? The answer is obvious.

I have written this article, to present the public with a little information concerning the Mormon creed. We wish no one to preach Universalism under false colors. We wish the Mormons to preach their own faith, and thus show the world that the best mode of gaining converts to any fanatical delusion, is, to have a creed which threatens people with endless woe, in case they do not embrace such delusion.