The Bible and the Book of Mormon.–A Prophecy! 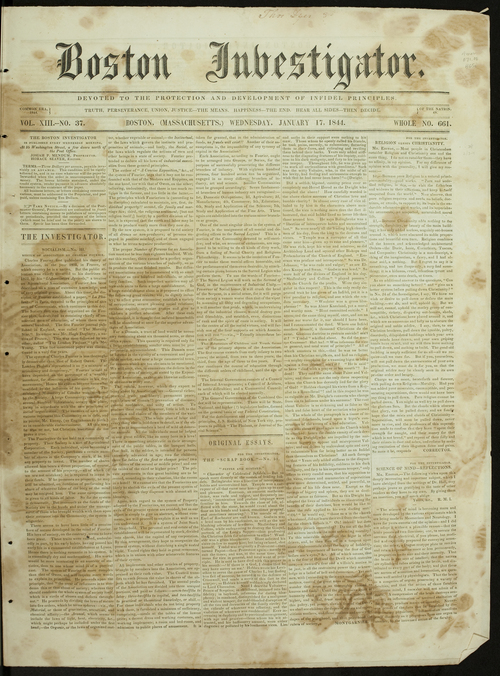 THE BIBLE AND THE BOOK OF MORMON.—A PROPHECY!

In the present article, we propose two things:—1st, to demonstrate that every part of the Bible, both of the Old and New Testament, has originated in the same way as the Book of Mormon; and 2dly, that Mormonism will ultimately become the predominant sect, and the Book itself be incorporated in the Bible, and they in the Church. This is our PROPHECY. Let the present No. of the Investigator be preserved; for in less than fifty years the prophecy will be fulfilled, and a part in less than ten. We lay aside our indignation of these Christian superstitions, for a time, and enter calmly, coolly, and earnestly on our work. We are as sure of effecting our object, as ever we were of performing successfully an algebraic equation.

We are, then, in the first place, to demonstrate that every part of the Bible, both of the Old and New Testament, has originated in the same way as the Book of Mormon— that is, “been found,” and then commended to the world. As our proposition, though particular as to formula, is nevertheless general in its character, and thus in confirmation taking the sweep of nations through the generators of the past, we are warranted in assuming the latter ground in its demonstration—that is, advancing generally known and universally received demonstrable truths, as confirmatory of what we aver to be fact. If either of these truths are denied, we will then descend to particulars, until the superstition itself becomes an evanescent point. It is a fact, that all the Old Testament up to the end of “Chronicles” and “Kings,” was found. Say the priests to the good king Josiah, “We have found the Book of the Law of the Lord.” It is a fact, often proclaimed both by Jews and Christians, and used as “a triumphant argument,” that the writings of no prophet were received as divinely inspired, until after his death and the fulfillment of his prophecy proved him to be a true prophet. That the Apocrypha was found, and only inserted to fill up the historical part and give salutary instructions in virtue, piety, and patriotism, we need not insist. But the Book of the Law of the Lord, the writings of the Prophets, and the Apocrypha, constitute the Old Testament.

We come now, of course, to the New Testament. At the Council of Nice, in Bythnia, Papius asserts, “That they put all the books, promiscuously under the communion table in the church, and prayed that they might find, in the morning, the inspired ones upon the table, and the spurious ones beneath—which accordingly happened.”—There they were found. This took place in 527. In 368, the Council of Laodicea sanctioned the transaction, by making a catalogue of the books—not including the Revelations. In 397, the third Council of Carthage sanctions that of Laodicea, and with the volumes incorporates the Revelations; of course, the Revelations had been found. In 401, the whole of the New Testament was presented to the assembly of the people; and yet St. Chrysostom, who died 407, asserts, that in his time, “The Acts of the Apostles were by many Christians entirely unknown:”—of course, the Acts had been found. And finally, Dr. Lardner, one of the ablest and most profound writers of “evidences,” declares that nothing was canonical, “people being left to judge for themselves, till the time of Cassiodorus, 556,” who was a compiler of the ecclesiastical histories of Socrates, Sozomen, and Theodoret, in one. Now, if here is not a finding the Books both of the Old and New Testament, and a commending them to the people, we are ignorant of all knowledge, and of all the rules of interpreting human actions. The books were found. The same with the Book of Mormon. The authority is the same—the ipse dixit of individuals interested in the finding. It is true the Book of Mormon has not yet been received by the authority of Councils; and simply, because it is not time. We had omitted one volume in the Old Testament—the Book of Jashur. This has been found; and as it is appealed to as high authority to confirm the highest in the Old Testament, it has to become incorporated in the Old, and it will appear in Ecclesiastical History, to all succeeding generations, that in 1830 the Book of Jashur, which had been lost more than three thousand years, was found and became a canonical part of the Old Testament.

2d. We proceed with confidence to our second position, which was—that the Mormons will ultimately become the predominant sect, the Book of Mormon be incorporated in the Bible, and they in the church. That they will become predominant, we argue from the fact, that their form of worship, in its officers, spirit, and essence, is exactly adapted to the genius of the times, especially of the superstition; and that they are persecuted. They denominate themselves the “Latter Day Saints;” have all the high offices and dignities embraced both in the Jewish and Christian superstitions; give every possible latitude and longitude to spiritual pride in divine gifts and graces, from prophecying to sanctity in self-denial. They enter upon the stage of action at a time in which sentiment, heart work, is every thing, and doctrine nothing—at a universal electric fusion of sects and denominations, in which Unitarians, Universalists, Quakers, and Shakers, are noticed as to churches and functionaries, “very respectable,” when twenty years ago the Edwards and Emmons and Masons were ranking them with the “damnable heretics,” and praying fervently for their conversion or destruction. It was once the same with all Arminians. The same, emphatically, with the Methodists. The Arminians, more lax in their faith and practice, are now a grand and respectable division of the church of Jesus Christ; the Methodists, one of the predominant sects, whom no man dare despise or anathematize; and the Quakers, Shakers, Universalists, and Unitarians, are respectable.

What shall prevent the ascendency of the Mormons? At this far more favorable time—a time in which they may be said to be floated over the waters of the sanctuary, the same as oil upon the waves of the ocean, what is to prevent them from becoming a constellation of the brightest form?—We mistook. We said a sect. They are destined to something infinitely beyond it. They are to become a Superstition, the same as the Christian, or Mahometan. It will inevitably be the case. Moses was a prophet, Jesus was a prophet, Mahomet was a prophet, but Joseph Smith is a greater. The only difficulty in the way, is, the assumption is not sufficiently rank. It rests on Mormon. This will give it an intermediate character, the same as republic in governments, until it can slide into the imperial, either by stratagem or power. Now, if this be not the result in regard to Mormonism, then the world superstitious, and the ecclesiagogue portion of our nature, has completely changed; and substances, “coming events,” instead of “casting their shadows before,” are nothing—bodyless and shadowless. But why do we reason, when the reality is before us? In ten years they are spoken of as 100,000. They are spread over England and the United States.—Persecution cannot diminish, but increase them. For every Mormon slain, ten will rise up to collect his ashes, embalm his memory, and propagate his faith. Listen to our prophecy. We are no Mormon, God knows, or, at any rate, we know. We believe their religion is the same as that of all others, founded in delusion, deceit, and falsehood— in books that are found; but the predominancy of Mormonism will assuredly be the case, and is as fully demonstrated and demonstrable, as, that from adequate causes and existing antecedents, legitimate effects and consequences must follow.

Thus, we think we have accomplished our object: proved that the Books of the Old and New Testament rest on the same authority as the Book of Mormon—that is,

“have been found;” that the Book of Mormon will ultimately become incorporated in the Bible, and they in the Church. We have argued from fact, and the exigency of the case; and, having effected our purpose, dismiss the subject.