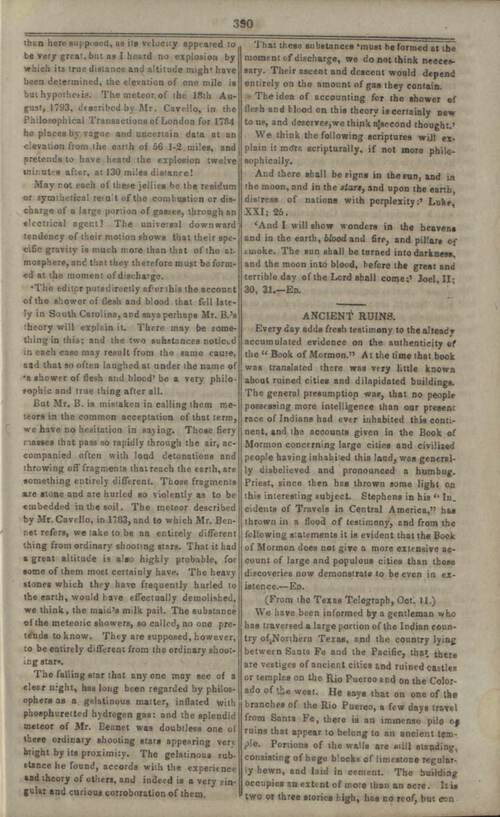 Every day adds fresh testimony to the already accumulated evidence on the authenticity of the “Book of Mormon.” At the time that book was translated there was very little known about ruined cities and dilapidated buildings. The general presumption was, that no people possessing more intelligence than our present race of Indians had ever inhabited this continent, and the accounts given in the Book of Mormon concerning large cities and civilized people having inhabited this land, was generally disbelieved and pronounced a humbug. Priest, since then has thrown some light on this interesting subject. Stephens in his “Incidents of Travels in Central America,” has thrown in a flood of testimony, and from the following statements it is evident that the Book of Mormon does not give a more extensive account of large and populous cities than those discoveries now demonstrate to be even in existence.—ED.

We have been informed by a gentleman who has traversed a large portion of the Indian country of Northern Texas, and the country lying between Santa Fe and the Pacific, that there are vestiges of ancient cities and ruined castles or temples on the Rio Puerco and on the Colorado of the west. He says that on one of the branches of the Rio Puerco, a few days travel from Santa Fe, there is an immense pile of ruins that appear to belong to an ancient temple. Portions of the walls are still standing, consisting of huge blocks of limestone regularly hewn, and laid in cement. The building occupies an extent of more than an acre. It is two or three stories high, has no roof, but con[391]tains many rooms generally of a square form, without windows, and the lower rooms are so dark and gloomy that they resemble caverns rather than the apartments of an edifice built for a human habitation.—Our informant did not give the style of architecture, but he believes it could not be erected by Spaniards or Europeans, as the stones are much worn by the rains, and indicate that the building has stood several hundred years. From his description we are induced to believe that it resembles the ruins of Palenque or Otulun. He says there are many similar ruins on the Colorado of the West, which empties into the Californian sea. In one of the valleys of the Cordileras traversed by this river, and about four hundred miles from its mouth, there is a large temple still standing, its walls and spires presenting scarcely any trace of dilapidation, and were it not for the want of a roof it might be rendered habitable. Near it, scattered along the declivity of a mountain, are the ruins of what must have been once a large city. The traces of a large aqueduct, part of which is however in the solid rock, are still visible. Neither the Indians residing in the vicinity, nor the oldest Spanish settlers of the nearest settlements, can give any account of the origin of these buildings. They merely know that they have stood there from the earliest periods to which their traditions extend. The antiquarian who is desirous to trace the Aztic or Toltec races in their migrations from the northern regions of America, may find in these ancient edifices many subjects of curious speculation.