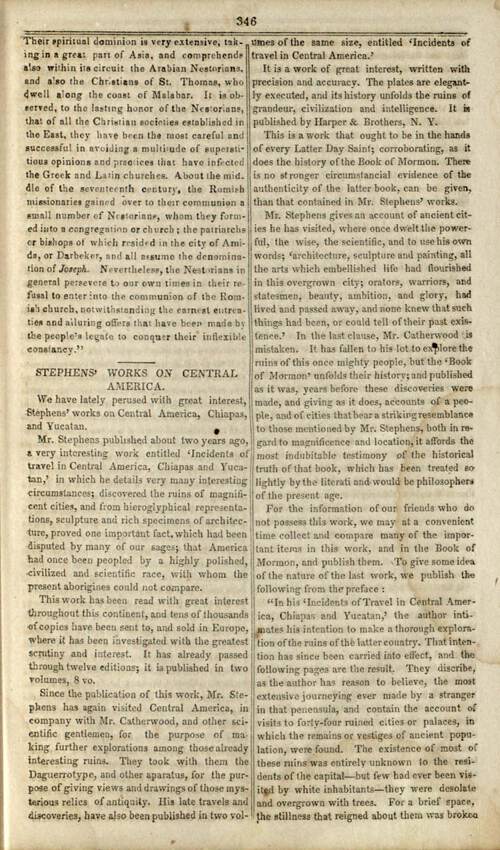 We have lately perused with great interest, Stephens’ works on Central America, Chiapas, and Yucatan.

Mr. Stephens published about two years ago, a very interesting work entitled ‘Incidents of travel in Central America, Chiapas and Yucatan,’ in which he details very many interesting circumstances; discovered the ruins of magnificent cities, and from hieroglyphical representations, sculpture and rich specimens of architecture, proved one important fact, which had been disputed by many of our sages; that America had once been peopled by a highly polished, civilized and scientific race, with whom the present aborigines could not compare.

This work has been read with great interest throughout this continent, and tens of thousands of copies have been sent to, and sold in Europe, where it has been investigated with the greatest scrutiny and interest. It has already passed through twelve editions; it is published in two volumes, 8 vo.

Since the publication of this work, Mr. Stephens has again visited Central America, in company with Mr. Catherwood, and other scientific gentlemen, for the purpose of making further explorations among those already interesting ruins. They took with them the Daguerrotype, and other aparatus, for the purpose of giving views and drawings of those mysterious relics of antiquity. His late travels and discoveries, have also been published in two volumes of the same size, entitled ‘Incidents of travel in Central America.’

It is a work of great interest, written with precision and accuracy. The plates are elegantly executed, and its history unfolds the ruins of grandeur, civilization and intelligence. It is published by Harper & Brothers, N. Y.

This is a work that ought to be in the hands of every Latter Day Saint; corroborating, as it does the history of the Book of Mormon. There is no stronger circumstantial evidence of the authenticity of the latter book, can be given, than that contained in Mr. Stephens’ works.

Mr. Stephens gives an account of ancient cities he has visited, where once dwelt the powerful, the wise, the scientific, and to use his own words; ‘architecture, sculpture and painting, all the arts which embellished life had flourished in this overgrown city; orators, warriors, and statesmen, beauty, ambition, and glory, had lived and passed away, and none knew that such things had been, or could tell of their past existence.’ In the last clause, Mr. Catherwood is mistaken. It has fallen to his lot to explore the ruins of this once mighty people, but the ‘Book of Mormon’ unfolds their history; and published as it was, years before these discoveries were made, and giving as it does, accounts of a people, and of cities that bear a striking resemblance to those mentioned by Mr. Stephens, both in regard to magnificence and location, it affords the most indubitable testimony of the historical truth of that book, which has been treated so lightly by the literati and would be philosophers of the present age.

For the information of our friends who do not possess this work, we may at a convenient time collect and compare many of the important items in this work, and in the Book of Mormon, and publish them. To give some idea of the nature of the last work, we published the following from the preface:

“In his ‘Incidents of Travel in Central America, Chiapas, and Yucatan,’ the author intimates his intention to make a thorough exploration of the ruins of the latter country.

That intention has since been carried into effect, and the following pages are the result.

They discribe, as the author has reason to believe, the most extensive journeying ever made by a stranger in that penensula, and contain the account of visits to forty-four ruined cities or palaces, in which the remains or vestiges of ancient population, were found. The existence of most of these ruins was entirely unknown to the residents of the capital—but few had ever been visited by white inhabitants—they were desolate and overgrown with trees. For a brief space, the stillness that reigned about them was broken

[346] and they were again left to solitude and silence. Time and the elements are hastening them to utter destruction. In a few generations, great edifices, their facades covered with sculptured ornaments, already croaking and yawning, must fall, and become mere shapeless mounds. It has been the fortune of the author to step between them and the destruction to which they are destined, and it is his hope to snatch from oblivion these perishing, but still gigantic memorials of a mysterious people.”