Remarks on the Mormon Expose 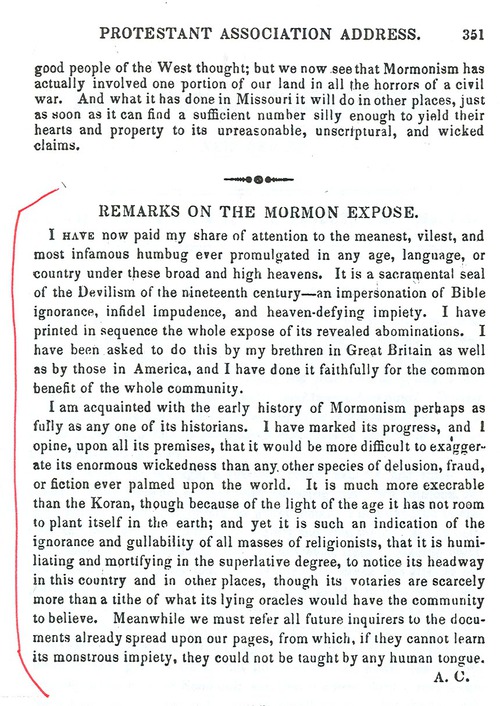 REMARKS ON THE MORMON EXPOSE.

I HAVE now paid my share of attention to the meanest, vilest, and most infamous humbug ever promulgated in any age, language, or country under these broad and high heavens. It is a sacramental seal of the Devilism of the nineteenth century—an impersonation of Bible ignorance, infidel impudence, and heaven-defying impiety. I have printed in sequence the whole expose of its revealed abominations. I have been asked to do this by my brethren in Great Britain as well as by those in America, and I have done it faithfully for the common benefit of the whole community.

I am acquainted with the early history of Mormonism perhaps as fully as any one of its historians. I have marked its progress, and I opine, upon all its premises, that it would be more difficult to exaggerate its enormous wickedness than any other species of delusion, fraud, or fiction ever palmed upon the world. It is much more execrable than the Koran, though because of the light of the age it has not room to plant itself in the earth; and yet it is such an indication of the ignorance and gullability of all masses of religionists, that it is humiliating and mortifying in the superlative degree, to notice its headway in this country and in other places, though its votaries are scarcely more than a tithe of what its lying oracles would have the community to believe. Meanwhile we must refer all future inquirers to the documents already spread upon our pages, from which, if they cannot learn its monstrous impiety, they could not be taught by any human tongue.