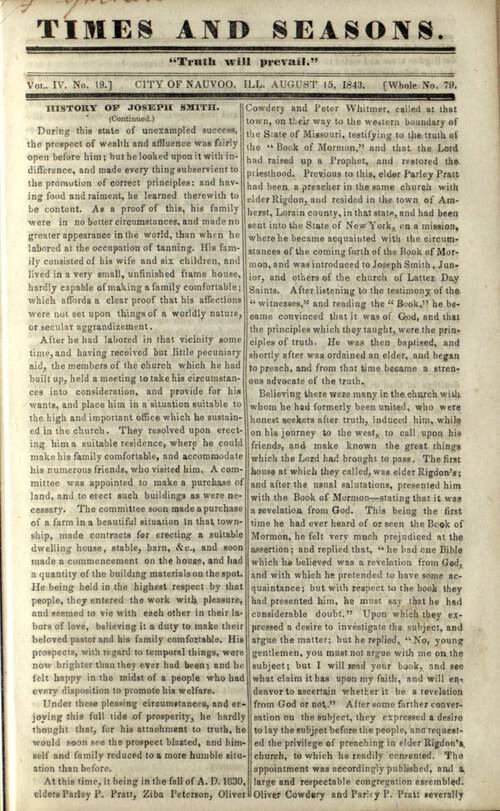 During this state of unexampled success, the prospect of wealth and affluence was fairly open before him; but he looked upon it with indifference, and made every thing subservient to the promotion of correct principles: and having food and raiment, he learned therewith to be content. As a proof of this, his family were in no better circumstances, and made no greater appearance in the world, than when he labored at the occupation of tanning. His family consisted of his wife and six children, and lived in a very small, unfinished frame house, hardly capable of making a family comfortable; which affords a clear proof that his affections were not set upon things of a worldly nature, or secular aggrandizement.

After he had labored in that vicinity some time, and having received but little pecuniary aid, the members of the church which he had built up, held a meeting to take his circumstances into consideration, and provide for his wants, and place him in a situation suitable to the high and important office which he sustained in the church. They resolved upon erecting him a suitable residence, where he could make his family comfortable, and accommodate his numerous friends, who visited him. A committee was appointed to make a purchase of land, and to erect such buildings as were necessary. The committee soon made a purchase of a farm in a beautiful situation in that township, made contracts for erecting a suitable dwelling house, stable, barn, &c., and soon made a commencement on the house, and had a quantity of the building materials on the spot. He being held in the highest respect by that people, they entered the work with pleasure, and seemed to vie with each other in their labors of love, believing it a duty to make their beloved pastor and his family comfortable. His prospects, with regard to temporal things, were now brighter than they ever had been; and he felt happy in the midst of a people who had every disposition to promote his welfare.

Under these pleasing circumstances, and enjoying this full tide of prosperity, he hardly thought that, for his attachment to truth, he would soon see the prospect blasted, and himself and family reduced to a more humble situation than before.

At this time, it being in the fall of A. D. 1830, elders Parley P. Pratt, Ziba Peterson, Oliver Cowdery and Peter Whitmer, called at that town, on their way to the western boundary of the State of Missouri, testifying to the truth of the “Book of Mormon,” and that the Lord had raised up a Prophet, and restored the priesthood.

Previous to this, elder Parley Pratt had been a preacher in the same church with elder Rigdon, and resided in the town of Amherst, Lorain county, in that state, and had been sent into the State of New York, on a mission, where he became acquainted with the circumstances of the coming forth of the Book of Mormon, and was introduced to Joseph Smith, Junior, and others of the church of Latter Day Saints. After listening to the testimony of the “witnesses,” and reading the “Book,” he became convinced that it was of God, and that the principles which they taught, were the principles of truth. He was then baptised, and shortly after was ordained an elder, and began to preach, and from that time became a strenous advocate of the truth.

Believing there were many in the church with whom he had formerly been united, who were honest seekers after truth, induced him, while on his journey to the west, to call upon his friends, and make known the great things which the Lord had brought to pass.

The first house at which they called, was elder Rigdon’s; and after the usual salutations, presented him with the Book of Mormon—stating that it was a revelation from God. This being the first time he had ever heard of or seen the Book of Mormon, he felt very much prejudiced at the assertion; and replied that, “he had one Bible which he believed was a revelation from God, and with which he pretended to have some acquaintance; but with respect to the book they had presented him, he must say that he had considerable doubt.”

Upon which they expressed a desire to investigate the subject, and argue the matter; but he replied, “No, young gentlemen, you must not argue with me on the subject; but I will read your book, and see what claim it has upon my faith, and will endeavor to ascertain whether it be a revelation from God or not.” After some farther conversation on the subject, they expressed a desire to lay the subject before the people, and requested the privilege of preaching in elder Rigdon’s church, to which he readily consented. The appointment was accordingly published, and a large and respectable congregation assembled. Oliver Cowdery and Parley P. Pratt severally [209] addressed the meeting. At the conclusion, elder Rigdon arose and stated to the congregation that the information they had that evening received, was of an extraordinary character, and certainly demanded their most serious consideration: and as the apostle advised his brethren “to prove all things, and hold fast that which is good,” so he would exhort his brethren to do likewise, and give the matter a careful investigation; and not turn against it, without being fully convinced of its being an imposition, lest they should, possibly, resist the truth.

This was, indeed, generous on the part of elder Rigdon, and gave evidence of his entire freedom from any sectarian bias; but allowing his mind full scope to range, untrammeled, through the scriptures, embracing every principle of truth, and rejecting error, under whatever guise it should appear. He was perfectly willing to allow his members the same privilege. Having received great light on the scriptures, he felt desirous to receive more, from whatever quarter it should come. This was his prevailing characteristic; and if any sentiment was advanced by any one, that was new, or tended to throw light on the scriptures, or the dealings of God with the children of men, it was always gladly received, and treasured up in his mind. After the meeting broke up, the brethren returned home with elder Rigdon, and conversed upon the important things which they had proclaimed. He informed them that he should read the Book of Mormon, give it a full investigation, and then would frankly tell them his mind and feelings on the subject—told them they were welcome to abide at his house until he had opportunity of reading it.

About two miles from elder Rigdon’s, at the town of Kirtland, were a number of the members of his church, who lived together, and had all things common—from which circumstance has arisen the idea that this was the case with the Church of Jesus Christ— to which place they immediately repaired, and proclaimed the gospel to them, with some considerable success; for their testimony was received by many of the people, and seventeen came forward in obedience to the gospel.

While thus engaged, they visited elder Rigdon occasionally, and found him very earnestly engaged in reading the “Book of Mormon,”—praying to the Lord for direction, and meditating on the things he heard and read; and after a fortnight from the time the book was put in his hands, he was fully convinced of the truth of the work, by a revelation from Jesus Christ, which was made known to him in a remarkable manner, so that he could exclaim “flesh and blood hath not revealed it unto me, but my father which is in heaven.”

Being now fully satisfied in his own mind of the truth of the work, and the necessity of obedience thereto, he informed his wife of the same, and was happy to find that she was not only diligently investigating the subject, but was believing with all her heart, and was desirous of obeying the truth, which, undoubtedly, was a great satisfaction to his mind.