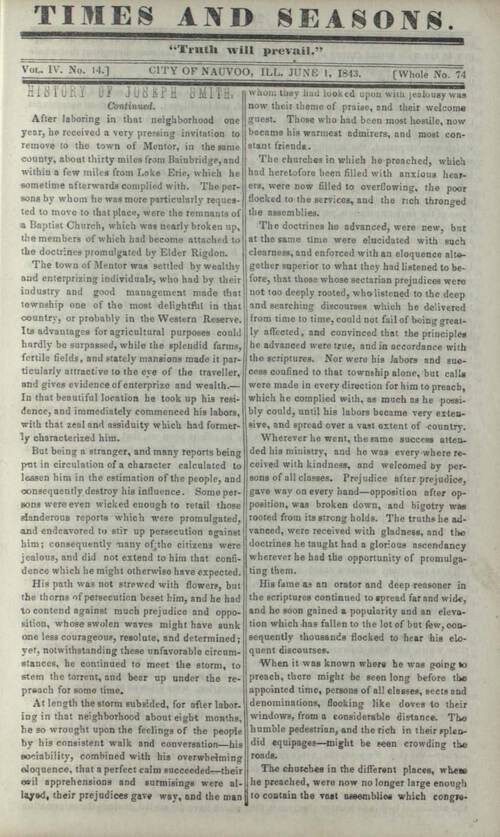 After laboring in that neighborhood one year, he received a very pressing invitation to remove to the town of Mentor, in the same county, about thirty miles from Bainbridge, and within a few miles from Lake Erie, which he sometime afterwards complied with. The persons by whom he was more particularly requested to move to that place, were the remnants of a Baptist Church, which was nearly broken up, the members of which had become attached to the doctrines promulgated by Elder Rigdon.

The town of Mentor was settled by wealthy and enterprizing individuals, who had by their industry and good management made that township one of the most delightful in that country, or probably in the Western Reserve. Its advantages for agricultural purposes could hardly be surpassed, while the splendid farms, fertile fields, and stately mansions made it particularly attractive to the eye of the traveller, and gives evidence of enterprize and wealth.—In that beautiful location he took up his residence, and immediately commenced his labors, with that zeal and assiduity which had formerly characterized him.

But being a stranger, and many reports being put in circulation of a character calculated to lessen him in the estimation of the people, and consequently destroy his influence. Some persons were even wicked enough to retail those slanderous reports which were promulgated, and endeavored to stir up persecution against him; consequently many of the citizens were jealous, and did not extend to him that confidence which he might otherwise have expected.

His path was not strewed with flowers, but the thorns of persecution beset him, and he had to contend against much prejudice and opposition, whose swollen waves might have sunk one less courageous, resolute, and determined; yet, notwithstanding these unfavorable circumstances, he continued to meet the storm, to stem the torrent, and bear up under the reproach for some time.

At length the storm subsided, for after laboring in that neighborhood about eight months, he so wrought upon the feelings of the people by his consistent walk and conversation—his sociability, combined with his overwhelming eloquence, that a perfect calm succeeded—their evil apprehensions and surmisings were allayed, their prejudices gave way, and the man whom they had looked upon with jealousy was now their theme of praise, and their welcome guest. Those who had been most hostile, now became his warmest admirers, and most constant friends.

The churches in which he preached, which had heretofore been filled with anxious hearers, were now filled to overflowing, the poor flocked to the services, and the rich thronged the assemblies.

The doctrines he advanced, were new, but at the same time were elucidated with such clearness, and enforced with an eloquence altogether superior to what they had listened to before, that those whose sectarian prejudices were not too deeply rooted, who listened to the deep and searching discourses which he delivered from time to time, could not fail of being greatly affected, and convinced that the principles he advanced were true, and in accordance with the scriptures. Nor were his labors and success confined to that township alone, but calls were made in every direction for him to preach, which he complied with, as much as he possibly could, until his labors became very extensive, and spread over a vast extent of country.

Wherever he went, the same success attended his ministry, and he was every where received with kindness, and welcomed by persons of all classes. Prejudice after prejudice, gave way on every hand—opposition after opposition, was broken down, and bigotry was rooted from its strong holds. The truths he advanced, were received with gladness, and the doctrines he taught had a glorious ascendancy wherever he had the opportunity of promulgating them.

His fame as an orator and deep reasoner in the scriptures continued to spread far and wide, and he soon gained a popularity and an elevation which has fallen to the lot of but few, consequently thousands flocked to hear his eloquent discourses.

When it was known where he was going to preach, there might be seen long before the appointed time, persons of all classes, sects and denominations, flocking like doves to their windows, from a considerable distance. The humble pedestrian, and the rich in their splendid equipages—might be seen crowding the roads.

The churches in the different places, where he preached, were now no longer large enough to contain the vast assemblies which congre-[209]gated from time to time, so that he had to repair to the wide spread canopy of heaven, and in the woods and in the groves, he addressed the multitudes which flocked to hear him.—Nor was his preaching in vain. It was not empty sound that so closely engaged the attention of his audiences, and with which they were so deeply interested, but it was the truths which were imparted, the intelligence which was conveyed, and the duties which were enforced.

Not only did the writings of the New Testament occupy his attention, but occasionally those of the ancient prophets, particularly those prophesies which had reference to the present and to the future, were brought up to review and treated in a manner entirely new, and deeply interesting. No longer did he follow the old beaten track, which had been travelled for ages by the religious world, but he dared to enter upon new grounds; called in question the opinions of uninspired men; shewed the foolish ideas of many commentators on the sacred scriptures—exposed their ignorance and contradictions—threw new light on the sacred volume, particularly those prophesies which so deeply interest this generation, and which had been entirely overlooked, or mystified by the religious world—cleared up scriptures which had heretofore appeared inexplicable, and delighted his astonished audience with things “new and old”—proved to a demonstration the literal fulfilment of prophesy, the gathering of Israel in the last days, to their ancient inheritances, with their ultimate splendor and glory; the situation of the world at the coming of the Son of Man—the judgments which Almighty God would pour out upon the ungodly, prior to that event, and the reign of Christ with his saints on the earth, in the millenium.

These important subjects could not fail to have their weight on the minds of his hearers, who clearly discerned the situation in which they were placed,by the sound and logical arguments which he adduced; and soon, numbers felt the importance of obeying that form of doctrine which had been delivered them; so that they might be accounted worthy to escape those things which were coming on the earth, and many came forward desiring to be baptized for the remission of sins. He accordingly commenced to baptize, and like John of old, there flocked to him people from all the region round about— persons of all ranks and standings in society—the rich, the poor, the noble and the brave, flocked to be baptized of him. Nor was this desire confined to individuals, or families, but whole societies threw away their creeds and articles of faith, and became obedient to the faith he promulgated, and he soon had large and flourishing societies throughout that whole region of country.

He now was a welcome visiter wherever he travelled—his society was courted by the learned, and intelligent, and the highest encomiums were bestowed upon him for his biblical lore, and his eloquence.

The work of the ministry engaged all his time and attention, he felt deeply for the salvation of his fellow man, and for the attainment of which, he labored with unceasing dilligence.