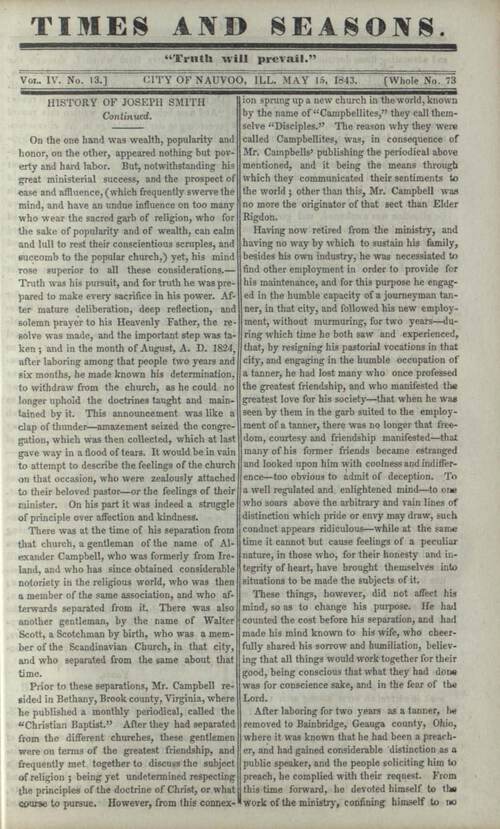 On the one hand was wealth, popularity and honor, on the other, appeared nothing but poverty and hard labor. But, notwithstanding his great ministerial success, and the prospect of ease and affluence, (which frequently swerve the mind, and have an undue influence on too may who wear the sacred garb of religion, who for the sake of popularity and of wealth, can calm and lull to rest their conscientious scruples, and succomb to the popular church,) yet, his mind rose superior to all these considerations.—Truth was his pursuit, and for truth he was prepared to make every sacrifice in his power. After mature deliberation, deep reflection, and solemn prayer to his Heavenly Father, the resolve was made, and the important step was taken; and in the month of August, A. D. 1824, after laboring among that people two years and six months, he made known his determination, to withdraw from the church, as he could no longer uphold the doctrines taught and maintained by it. This announcement was like a clap of thunder—amazement seized the congregation, which was then collected, which at last gave way in a flood of tears. It would be in vain to attempt to describe the feelings of the church on that occasion, who were zealously attached to their beloved pastor—or the feelings of their minister. On his part it was indeed a struggle of principle over affection and kindness.

There was at the time of his separation from that church, a gentleman of the name of Alexander Campbell, who was formerly from Ireland, and who has since obtained considerable notoriety in the religious world, who was then a member of the same association, and who afterwards separated from it. There was also another gentleman, by the name of Walter Scott, a Scotchman by birth, who was a member of the Scandinavian Church, in that city, and who separated from the same about that time.

Prior to these separations, Mr. Cambpell resided in Bethany, Brook county, Virginia, where he published a monthly periodical, called the “Christian Baptist.” After they had separated from the different churches, these gentlemen were on terms of the greatest friendship, and frequently met together to discuss the subject of religion; being yet undetermined respecting the principles of the doctrine of Christ, or what course to pursue. However, from this connexion sprung up a new church in the world, known by the name of “Campbellites,” they call themselves “Disciples.” The reason why they were called Campbellites, was, in consequence of Mr. Campbells’ publishing the periodical above mentioned, and it being the means through which they communicated their sentiments to the world; other than this, Mr. Campbell was no more the originator of that sect than Elder Rigdon.

Having now retired from the ministry, and having no way by which to sustain his family, besides his own industry, he was necessiated to find other employment in order to provide for his maintenance, and for this purpose he engaged in the humble capacity of a journeyman tanner, in that city, and followed his new employment, without murmuring, for two years—during which time he both saw and experienced, that, by resigning his pastorial vocations in that city, and engaging in the humble occupation of a tanner, he had lost many who once professed the greatest friendship; and who manifested the greatest love for his society—that when he was seen by them in the garb suited to the employment of a tanner, there was no longer that freedom, courtesy and friendship manifested—that many of his former friends became estranged and looked upon him with coolness and indifference—too obvious to admit of deception. To a well regulated and enlightened mind—to one who soars above the arbitrary and vain lines of distinction which pride or envy may draw, such conduct appears ridiculous—while at the same time it cannot but cause feelings of a peculiar nature, in those who, for their honesty and integrity of heart, have brought themselves into situations to be made the subjects of it.

These things, however, did not affect his mind, so as to change his purpose. He had counted the cost before his separation, and had made his mind known to his wife, who cheerfully shared his sorrow and humiliation, believing that all things would work together for their good, being conscious that what they had done was for conscience sake, and in the fear of the Lord.

After laboring for two years as a tanner, he removed to Bainbridge, Geauga county, Ohio, where it was know that he had been a preacher, and had gained considerable distinction as a public speaker, and the people soliciting him to preach, he complied with their request. From this time forward, he devoted himself to the work of the ministry, confining himself to no [193] creed, but held up the Bible as the rule of faith, and advocating those doctrines which had been the subject of his, and Mr. Campbell’s investigations, viz: Repentance and baptism, for the remission of sins.

He continued to labor in that vicinity one year, and during that time, his former success attended his labors. Large numbers invariably attended his meetings. While he labored in that neighbourhood, he was instrumental in building up a large and respectable church, in the town of Mantua, Portage county, Ohio. The doctrines which he advanced being new, public attention was awakened, and great excitement pervaded throughout that whole section of country, and frequently the congregations which he addressed, were so large that it was impossible to make himself audible to all. The subjects he proposed were presented in such an impressive manner to the congregations, that those who were unbiased by bigotry and prejudice, had to exclaim, “we never heard it in this manner before.” There were some, however, that opposed the doctrines which he advanced, but not with that opposition which ever ought to characterize the noble and ingenious. Those by whom he was opposed, well knew that an honorable and public investigation, would inevitably discover the weakness and fatality of their doctrines; consequently they shunned it, and endeavored, by ridiculing the doctrines which he promulgated, to suppress them.

This, however, did not turn him from the path which he felt to be his duty; for he continued to set forth the doctrines of repentance, and baptism for remission of sins, and the gift of the Holy Ghost, according to the teachings of Peter, on the day of Pentecost, exhorting his hearers in the mean time, to throw away their creeds of faith—to take the Bible as their standard, and search its sacred pages—to learn to live by every word that proceedeth from the mouth of the Lord, and to rise above every sectarian sentiment, and the traditions of the age, and explore the wide and glorious fields of truth which the scriptures holds out to them.