“To the Editor of the Times & Seasons” 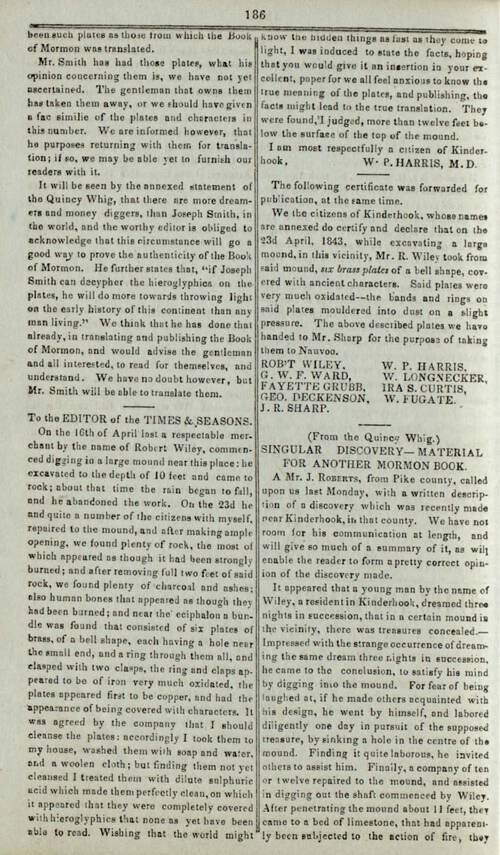 To the EDITOR of the TIMES & SEASONS.

On the 16th of April last a respectable merchant by the name of Robert Wiley, commenced digging in a large mound near this place: he excavated to the depth of 10 feet and came to rock; about that time the rain began to fall, and he abandoned the work. On the 23d he and quite a number of the citizens with myself, repaired to the mound, and after making ample opening, we found plenty of rock, the most of which appeared as though it had been strongly burned; and after removing full two feet of said rock, we found plenty of charcoal and ashes; also human bones that appeared as though they had been burned; and near the eciphalon a bundle was found that consisted of six plates of brass, of a bell shape, each having a hole near the small end, and a ring through them all, and clasped with two claps, the ring and claps appeared to be of iron very much oxidated, the plates appeared first to be copper, and had the appearance of being covered with characters. It was agreed by the company that I should cleanse the plates: accordingly I took them to my house, washed them with soap and water, and a woolen cloth; but finding them not yet cleansed I treated them with dilute sulphuric acid which made them perfectly clean, on which it appeared that they were completely covered with hieroglyphics that none as yet have been able to read. Wishing that the world might know the hidden things as fast as they come to light, I was induced to state the facts, hoping that you would give it an insertion in your excellent, paper for we all feel anxious to know the true meaning of the plates, and publishing, the facts might lead to the true translation. They were found, I judged, more than twelve feet below the surface of the top of the mound.

I am most respectfully a citizen of Kinderhook, W. P. HARRIS, M. D.

The following certificate was forwarded for publication, at the same time.

We the citizens of Kinderhook, whose names are annexed do certify and declare that on the 23d April, 1843, while excavating a large mound, in this vicinity, Mr. R. Wiley took from said mound, six brass plates of a bell shape, covered with ancient characters. Said plates were very much oxidated—the bands and rings on said plates mouldered into dust on a slight pressure.

The above described plates we have handed to Mr. Sharp for the purpose of taking them to Nauvoo.