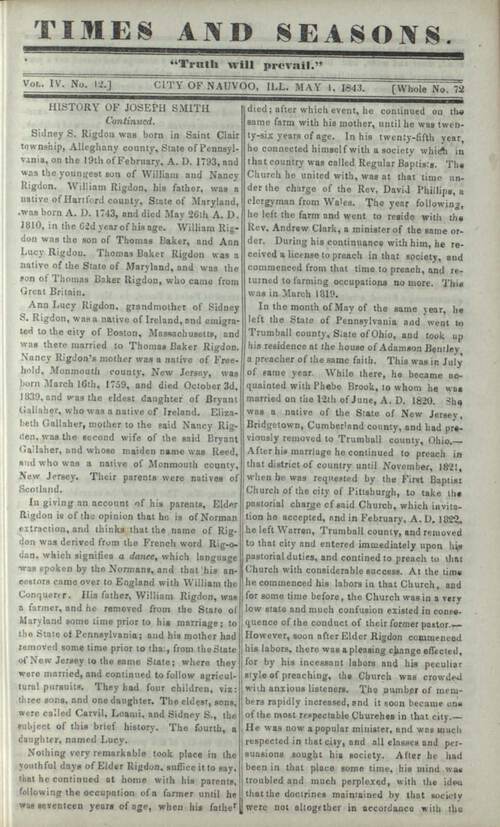 Sidney S. Rigdon was born in Saint Clair township, Alleghany county, State of Pennsylvania, on the 19th of February, A. D. 1793, and was the youngest son of William and Nancy Rigdon. William Rigdon, his father, was a native of Hartford county, State of Maryland, and was born A. D. 1743, and died May 26th A. D. 1810, in the 62d year of his age. William Rigdon was the son of Thomas Baker, and Ann Lucy Rigdon. Thomas Baker Rigdon was a native of the State of Maryland, and was the son of Thomas Baker Rigdon, who came from Great Britain.

In giving an account of his parents, Elder Rigdon is of the opinion that he is of Norman extraction, and thinks that the name of Rigdon was derived from the French word Rig-o-dan, which signifies a dance, which language was spoken by the Normans, and that his ancestors came over to England with William the Conqueror. His father, William Rigdon, was a farmer, and he removed from the State of Maryland some time prior to his marriage; to the State of Pennsylvania; and his mother had removed some time prior to that, from the State of New Jersey to the same State; where they were married, and continued to follow agricultural pursuits. They had four children, viz: three sons, and one daughter. The eldest, sons, were called Carvil, Loami, and Sidney S., the subject of this brief history. The fourth, a daughter, named Lucy.

Nothing very remarkable took place in the youthful days of Elder Rigdon, suffice it to say, that he continued at home with his parents, following the occupation of a farmer until he was seventeen years of age, when his father died; after which event, he continued on the same farm with his mother, until he was twenty-six years of age. In his twenty-fifth year, he connected himself with a society which in that country was called Regular Baptists. The Church he united with, was at that time under the charge of the Rev. David Phillips, a clergyman from Wales. The year following, he left the farm and went to reside with the Rev. Andrew Clark, a minister of the same order. During his continuance with him, he received a license to preach in that society, and commenced from that time to preach, and returned to farming occupations no more. This was in March 1819.

In the month of May of the same year, he left the State of Pennsylvania and went to Trumball county, State of Ohio, and took up his residence at the house of Adamson Bentley, a preacher of the same faith. This was in July of same year. While there, he became acquainted with Phebe Brook, to whom he was married on the 12th of June, A. D. 1820. She was a native of the State of New Jersey, Bridgetown, Cumberland county, and had previously removed to Trumball county, Ohio.—After his marriage he continued to preach in that district of country until November, 1821, when he was requested by the First Baptist Church of the city of Pittsburgh, to take the pastorial charge of said Church, which invitation he accepted, and in February, A. D. 1822, he left Warren, Trumball county, and removed to that city and entered immediately upon his pastorial duties, and continued to preach to that Church with considerable success. At the time he commenced his labors in that Church, and for some time before, the Church was in a very low state and much confusion existed in consequence of the conduct of their former pastor.—

However, soon after Elder Rigdon commenced his labors, there was a pleasing change effected, for by his incessant labors and his peculiar style of preaching, the Church was crowded with anxious listeners. The number of members rapidly increased, and it soon became one of the most respectable Churches in that city.—He was now a popular minister, and was much respected in that city, and all classes and persuasions sought his society. After he had been in that place some time, his mind was troubled and much perplexed, with the idea that the doctrines maintained by that society were not altogether in accordance with the [177] scriptures. This thing continued to agitate his mind, more and more, and his reflections on these occasions were peculiarly trying; for according to his views of the word of God, no other church that he was acquainted with was right, or with whom he could associate; consequently, if he was to disavow the doctrine of the Church with whom he was then associated, he knew of no other way of obtaining a livelihood except by mental labor, and at that time had a wife and three children to support.