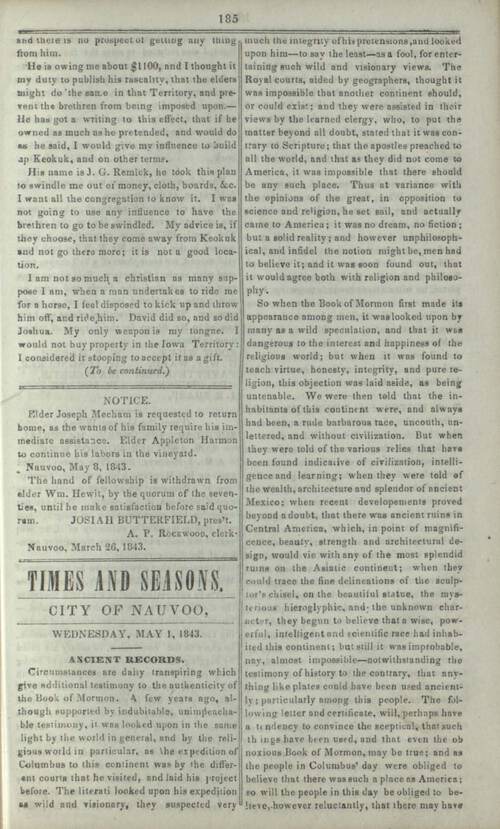 Circumstances are daily transpiring which give additional testimony to the authenticity of the Book of Mormon. A few years ago, although supported by indubitable, unimpeachable testimony, it was looked upon in the same light by the world in general, and by the religious world in particular, as the expedition of Columbus to this continent was by the different courts that he visited, and laid his project before. The literati looked upon his expedition as wild and visionary, they suspected very much the integrity of his pretensions, and looked upon him—to say the least—as a fool, for entertaining such wild and visionary views. The Royal courts, aided by geographers, thought it was impossible that another continent should, or could exist; and they were assisted in their views by the learned clergy, who, to put the matter beyond all doubt, stated that it was contrary to Scripture; that the apostles preached to all the world, and that as they did not come to America, it was impossible that there should be any such place. Thus at variance with the opinions of the great, in opposition to science and religion, he set sail, and actually came to America; it was no dream, no fiction; but a solid reality; and however unphilosophical, and infidel the notion might be, men had to believe it; and it was soon found out, that it would agree both with religion and philosophy.

So when the Book of Mormon first made its appearance among men, it was looked upon by many as a wild speculation, and that it was dangerous to the interest and happiness of the religious world; but when it was found to teach virtue, honesty, integrity, and pure religion, this objection was laid aside, as being untenable. We were then told that the inhabitants of this continent were, and always had been, a rude barbarous race, uncouth, unlettered, and without civilization. But when they were told of the various relics that have been found indicative of civilization, intelligence and learning; when they were told of the wealth, architecture and splendor of ancient Mexico; when recent developements proved beyond a doubt, that there was ancient ruins in Central America, which, in point of magnificence, beauty, strength and architectural design, would vie with any of the most splendid ruins on the Asiatic continent; when they could trace the fine delineations of the sculptor’s chisel, on the beautiful statue, the mysterious hieroglyphic, and the unknown character, they begun to believe that a wise, powerful, intelligent and scientific race had inhabited this continent; but still it was improbable, nay, almost impossible—notwithstanding the testimony of history to the contrary, that anything like plates could have been used anciently; particularly among this people. The following letter and certificate, will, perhaps have a tendency to convince the sceptical, that such things have been used, and that even the obnoxious Book of Mormon, may be true; and as the people in Columbus’ day were obliged to believe that there was such a place as America; so will the people in this day be obliged to believe, however reluctantly, that there may have [185] been such plates as those from which the Book of Mormon was translated.

Mr. Smith has had those plates, what his opinion concerning them is, we have not yet ascertained. The gentlemen that owns them has taken them away, or we should have given a fac similie of the plates and characters in this number. We are informed however, that he purposes returning with them for translation; if so, we may be able yet to furnish our readers with it.

It will be seen by the annexed statement of the Quincy Whig, that there are more dreamers and money diggers, than Joseph Smith, in the world, and the worthy editor is obliged to acknowledge that this circumstance will go a good way to prove the authenticity of the Book of Mormon. He further states that, “if Joseph Smith can decypher the hieroglyphics on the plates, he will do more towards throwing light on the early history of this continent than any man living.” We think that he has done that already, in translating and publishing the Book of Mormon, and would advise the gentleman and all interested, to read for themselves, and understand. We have no doubt however, but Mr. Smith will be able to translate them.