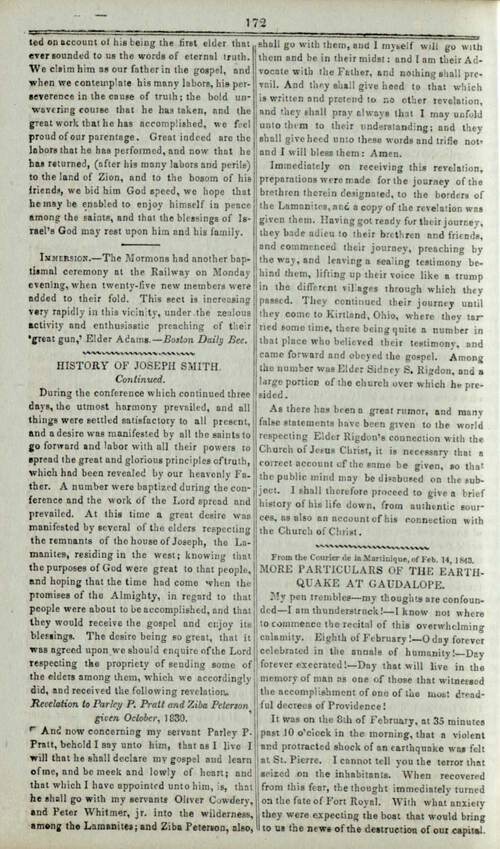 During the conference which continued three days, the utmost harmony prevailed, and all things were settled satisfactory to all present, and a desire was manifested by all the saints to go forward and labor with all their powers to spread the great and glorious principles of truth, which had been revealed by our heavenly Father. A number were baptized during the conference and the work of the Lord spread and prevailed. At this time a great desire was manifested by several of the elders respecting the remnants of the house of Joseph, the Lamanites, residing in the west; knowing that the purposes of God were great to that people, and hoping that the time had come when the promises of the Almighty, in regard to that people were about to be accomplished, and that they would receive the gospel and enjoy its blessings. The desire being so great, that it was agreed upon we should enquire of the Lord respecting the propriety of sending some of the elders among them, which we accordingly did, and received the following revelation.

Revelation to Parley P. Pratt and Ziba Peterson, given October, 1830.

And now concerning my servant Parley P. Pratt, behold I say unto him, that as I live I will that he shall declare my gospel and learn of me, and be meek and lowly of heart; and that which I have appointed unto him, is, that he shall go with my servants Oliver Cowdery, and Peter Whitmer, jr. into the wilderness, among the Lamanites; and Ziba Peterson, also, shall go with them, and I myself will go with them and be in their midst: and I am their Advocate with the Father, and nothing shall prevail. And they shall give heed to that which is written and pretend to no other revelation, and they shall pray always that I may unfold unto them to their understanding; and they shall give heed unto these words and trifle not, and I will bless them: Amen.

Immediately on receiving this revelation, preparations were made for the journey of the brethren therein designated, to the borders of the Lamanites, and a copy of the revelations was given them. Having got ready for their journey, they bade adieu to their brethren and friends, and commenced their journey, preaching by the way, and leaving a sealing testimony behind them, lifting up their voice like a trump in the different villages through which they passed. They continued their journey until they came to Kirtland, Ohio, where they tarried some time, there being quite a number in that place who believed their testimony, and came forward and obeyed the gospel. Among the number was Elder Sidney S. Rigdon, and a large portion of the church over which he presided.

As there has been a great rumor, and many false statements have been given to the world respecting Elder Rigdon's connection with the Church of Jesus Christ, it is necessary that a correct account of the same be given, so that the public mind may be disabused on the subject. I shall therefore proceed to give a brief history of his life down, from authentic sources, as also an account of his connection with the Church of Christ.