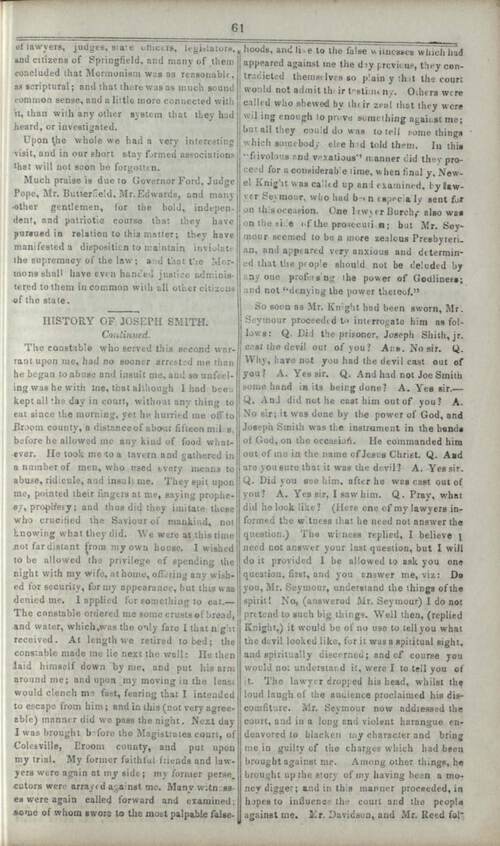 The constable who served this second warrant upon me, had no sooner arrested me than he began to abuse and insult me, and so unfeeling was he with me, that although I had been kept all the day in court, without any thing to eat since the morning, yet he hurried me off to Broom county, a distance of about fifteen miles, before he allowed me any kind of food whatever. He took me to a tavern and gathered in a number of men, who used every means to abuse, ridicule, and insult me. They spit upon me, pointed their fingers at me, saying prophesy, prophecy; and thus did they imitate those who crucified the Saviour of mankind, not knowing what they did. We were at this time not far distant from my own house. I wished to be allowed the privilege of spending the night with my wife, at home, offering any wished for security, for my appearance, but this was denied me. I applied for something to eat.—The constable ordered me some crusts of bread, and water, which was the only fare I that night received. At length we retired to bed; the constable made me lie next the wall: He then laid himself down by me, and put his arm around me; and upon my moving in the least would clench me fast, fearing that I intended to escape from him; and in this (not very agreeable) manner did we pass the night. Next day I was brought before the Magistrates court, of Colesville, Broom county, and put upon my trial. My former faithful friends and lawyers were again at my side; my former persecutors were arrayed against me. Many witnesses were again called forward and examined; some of whom swore to the most palpable falsehoods, and like to the false witnesses which had appeared against me the day previous, they contradicted themselves so plainly that the court would not admit their testimony. Others were called who shewed by their zeal that they were willing enough to prove something against me; but all they could do was to tell some things which somebody else had told them. In this “frivolous and vexatious” manner did they proceed for a considerable time, when finally, Newel Knight was called up and examined, by lawyer Seymour, who had been especially sent for on this occasion. One lawyer Burch, also was on the side of the prosecution; but Mr. Seymour seemed to be a more zealous Presbyterian, and appeared very anxious and determined that the people should not be deluded by any one professing the power of Godliness; and not “denying the power thereof.”

So soon as Mr. Knight had beeh sworn, Mr. Seymour proceeded to interrogate him as follows: Q. Did the prisoner, Joseph Smith, jr. cast the devil out of you? Ans. No sir. Q. Why, have not you had the devil cast out of you? A. Yes sir. Q. And had not Joe Smith some hand in its being done? A. Yes sir.—! Q. And did not he cast him out of you?

A. No sir; it was done by the power of God, and Joseph Smith was the instrument in the hands of God, on the occasion. He commanded him out of me in the name of Jesus Christ. Q. And are you sure that it was the devil? A. Yes sir. Q. Did you see him, after he was cast out of you? A. Yes sir, I saw him. Q. Pray, what did he look like? (Here one of my lawyers informed the witness that he need not answer the question.) The witness replied, I believe I need not answer your last question, but I will do it provided I be allowed to ask you one question, first, and you answer me, viz: Do you, Mr. Seymour, understand the things of the spirit! No, (answered Mr. Seymour) I do not pretend to such big things. Well then, (replied Knight,) it would be of no use to tell you what the devil looked like, for it was a spiritual sight, and spiritually discerned; and of course you would not understand it, were I to tell you of it. The lawyer dropped his head, whilst the loud laugh of the audience proclaimed his discomfiture. Mr. Seymour now addressed the court, and in a long and violent harangue endeavoured to blacken my character and bring me in guilty of the charges which had been brought against me. Among other things, he brought up the story of my having been a money digger; and in this manner proceeded, in hopes to influence the court and the people against me. Mr. Davidson, and Mr. Reed fol-[61] lowed on my behalf. They held forth in true colors, the nature of the prosecution; the malignancy of intention, and the apparent disposition to persecute their client, rather than to afford him justice. They took up the different arguments which had been brought by the lawyers for the prosecution, and having shewed their utter futility and misapplication, then proceeded to scrutinize the evidence which had been adduced, and each in his turn, thanked God that he had been engaged in so good a cause as that of defending a man whose character stood so well the test of such a strict investigation. In fact, these men, although not regular lawyers, were upon this occasion able to put to silence their opponents, and convince the court that I was innocent. They spoke like men inspired of God, whilst those who were arrayed against me trembled under the sound of their voices, and quailed before them like criminals before a bar of justice.

The majority of the assembled multitude had now began to find that nothing could be sustained against me: even the constable who arrested me, and treated me so badly, now came and apologised to me, and asked my forgiveness of his behaviour towards me; and so far was he changed that he informed me that the mob were determined that if the court acquitted me that they would h ave me, and rail ride me, and tar and feather me; and further, that he was willing to favor me, and lead me out in safety by a private way.

The court finding the charges against me not sustained, I was accordingly acquitted, to the great satisfaction of my friends, and vexation of my enemies, who were still determined upon molesting me, but through the instrumentality of my new friend, the constable, I was enabled to escape them and make my way in safety to my wife’s sister’s house, where I found my wife awaiting with much anxiety the issue of those ungodly proceedings: and with her in company next day, arrived in safety at my own house.

After a few days however, I again returned to Colesville, in company with Oliver Cowdery, for the purpose of confirming those whom we had thus been forced to abandon for a time.—We had scarcely arrived at Mr. Knight’s, when the mob was seen collecting together to oppose us, and we considered it wisdom to leave for home, which we did, without even waiting for any refreshment. Our enemies pursued us, and it was oftentimes as much as we could do to elude them; however, we managed to get home, after having travelled all night, except a short time, during which we were forced to rest ourselves under a large tree by the way side, sleeping and watching alternately. And thus were we persecuted on account of our religious faith—in a country, the constitution of which, guarantees to every man the indefeasible right, to worship God according to the dictates of his own conscience; and by men too who were professors of religion, and who were not backward to maintain this privilege for themselves; though they thus wantonly could deny it to us. For instance, Cyrus M’Master, a Presbyterian of high standing in his church, was one of the chief instigators of these persecutions; and he at one time told me personally, that he considered me guilty, without judge or jury. The celebrated Doctor Boyington, also a Presbyterian, was another instigator to these deeds of outrage; whilst a young man named Benton, of the same religious faith, swore out the first warrant against me. I could mention many others also, but for brevity’s sake will make these suffice for the present. [62]